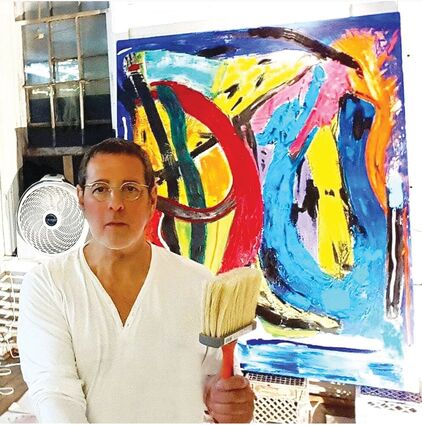 "Mr. Ray X" and "Elephant's Memory" are two of the pieces created by former Journey frontman Robert Fleischman that will be on display at Acquisitions of Fine Art in Hinsdale next month. The exhibit kicks off with an artist's reception from 5 to 10 p.m. Thursday, May 5, at the gallery, 10 E. Hinsdale Ave. (images provided)

"Music for me, I've said this before, it's like sculpting air," he said. "You're painting with frequencies."

Co-author of "Wheel in the Sky," composer of music for television series like "That '70s Show" and a solo artist, Fleischman also has been creating visual art since he was 13 years old.

Art and music aficionados will have a chance to see his collages and paintings and meet him in person at a reception next week at Acquisitions of Fine Art in Hinsdale.

Fleischman and gallery director Tom Karr met at a show at Hilton/Asmus Contemporary in Chicago.

Karr said he was attracted to the outlandish, astro-cosmic themes of Fleischman's collages, which he described as contemporary nostalgic pop art. He also appreciates Fleischman's abstract paintings, which are acidic and colorful and Fauvist in nature. He first invited Fleischman to do a show in the gallery's new location in West Palm Beach, Fla.

"This is a real niche in the art world," Karr said. "There's an overlap with rock and art. In the past I've done shows with Grace Slick, who is from Jefferson Airplane, and Paul Stanley from Kiss."

Fleischman said he's been interested in art since his early days in school, when projects involved folding pieces of paper in half to make patterns with paint.

"When you get to a certain point, the art starts coming back again, and that's what it did for me," he said. "It sort of opened up what I had really opened up in my life, but it was dormant."

His first works were collages he created by cutting out images from books and magazines. He said the cover of the Beatles' St. Pepper's album served as early inspiration. Now he uses his smartphone to achieve the same effect.

"I went through quite a few apps in a couple of months until I found the right combination to be able to construct a collage digitally and from my phone," he said, noting that he switched to a tablet. "I don't have a lot of scrap pieces of paper all over the floor that I have to vacuum and all that stuff. Now I sit on my couch cross-legged and do all these collages digitally."

He then meets with a printer in Chicago to view his compositions on a larger screen and determine if they needed editing before they are printed.

"They are done just magnificently," he said. "The paper I use really absorbs the colors just amazingly well. I'm really happy with the whole process that I've stumbled on."

Fleischman also has added painting to his repertoire.

"I just really gravitated toward the arts," he said. "I love the whole process. It's a dance, it's a ritual."

He said he enjoys alternating between visual and auditory art forms.

"I consider art like my silent music," he said. "All my life, when I'm not doing music, I do art. I ping-pong between the two constantly, all my life.

"When I'm tired of doing music and I need to turn off the music in my head, I go to do art," Fleischman continued. "I've done that for many, many years and I've been lucky enough to be able to do that."

By the end of summer, he expects to have finished his first new album in six years, which will mark a departure in style.

"I'm singing over these electronic landscapes and the music is very kind of hypnotic and there really isn't any chord structure to it," he said. "I played it for a couple of friends and they said, 'I've never heard anything like this before,' and that's what I'm doing. I'm trying to break the envelope." 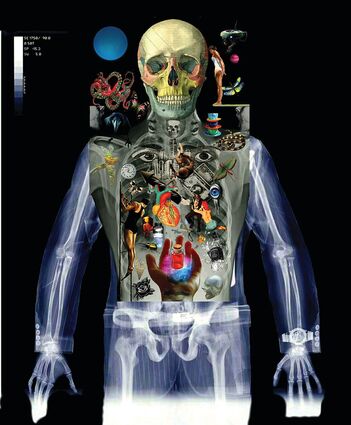 Fleischman said he's looking forward to the artist reception, which he expects will draw a mix of music and art enthusiasts.

"You just put yourself out there. You put your flag up and hope people will come out and look at it and salute it by buying something," he added.

The exhibit will feature the best examples of Fleischman's visual art and abstract compositions, including his latest pieces, Karr said. He expects Mancow, Survivor's Jim Peterik and other Chicago celebrities to attend the reception, along with clients who live in town. Karr said guests can expect a diverse, friendly crowd and some delicious French wine.

The exhibit will continue at the gallery through May 20.