Renovations give Central a new center 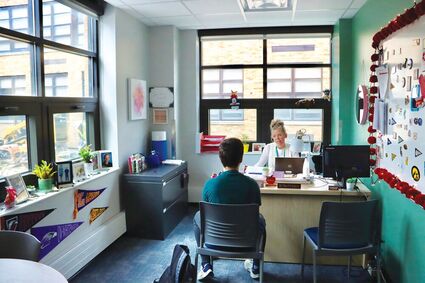 The new student commons at Hinsdale Central already has become a popular gathering place for students, with its bright airy feel and convenient location adjacent to the cafeteria. It's also next to the new student services center, bringing together once-scattered support personnel who can now can work together and meet with students in more comfortable offices and conference spaces. (Jim Slonoff photos)

Hinsdale Central support staff now have a workspace that reflects the collaborative spirit they bring to helping students thrive.

"Here are all the counselors on the first floor and special ed on the second floor," Walsh said, noting the school nurse and deans are also nearby. "Psych, social workers, everybody's within 50 steps of each other."

The collaboration necessary between these departments to most effectively address students' needs was hampered when they were spread around the building, he said.

"Social workers were in one wing, psychs were somewhere else, special ed was all over campus," Walsh explained. "From an efficiency standpoint, from a resource management side, having everybody here has been really a gamechanger."

There are meeting rooms for the multi-resource teams to get together as well as a testing room where kids on Tuesday were taking their makeup SATs. And the counselors appreciate the considerable upsizing of their new offices.

"In my old office, you would open the door and my desk was right by the door," Kasten said. "I have to walk farther to close my door, but it's all good," she added with a laugh.

Currently the view from Kasten's window shows more of the construction taking place at Central, part of the $139.8 million voters approved three years ago for upgrades at the district's two schools.

Just under $15.3 million was budgeted for the Central student services/special ed renovation.

Kasten's office is now right next to the social worker on her team, and all of the hallways, rooms and offices have been made ADA-compliant.

"Now if you're in a wheelchair or have some other disability, you have absolute access to all these places that you didn't have in previous years," Walsh said.

Upstairs is the dedicated special ed office, which also houses work stations for the school's paraprofessionals.

"It's just a much more efficient space," Walsh said.

A walkway outside looks out onto the new student commons, with a broad staircase tabbed "the learning steps" which faces a wall of windows and out into a now tighter but upgraded inner courtyard.

Walsh said the commons is designed to be a less crowded area for students to decompress before and after school and during lunch periods - but no food allowed.

"This student commons is giving people a place to go hang out, get a break from the day," he related. "After school this place is packed with kids."

He said an 80s video game day was already planned to be staged there with consoles and screens, and it also will be the venue for the PTO welcome for rising ninth-graders.

A quote from presidential inauguration poet Amanda Gorman adorns a changeable panel on the learning steps, and a large mural is planned for a wall along the top.

"This is the time for this generation to put their touch on this building," he said of the blank spaces yearning for content.

The student activities office also has been moved to this central location from the northwest corner of the campus.

"Now we're really putting our student activities at the hub, at the center of the building," he said, adding that the courtyard is expected to reopen to students next week. 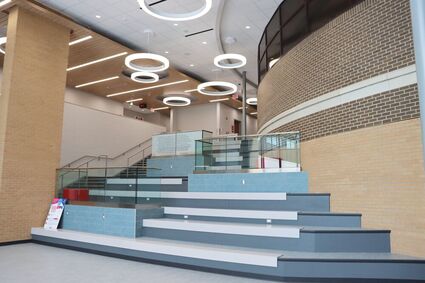 There also is a proposal to install a coffee/ice cream bar in the commons area as an additional option and possibly investing in touchscreen display to honor school Hall of Fame members.

Among the ongoing projects at Central are the revamping of the Fine Arts wing and the student cafeteria and the creation of Grant Street plaza, all of which will open for the start of the 2022-23 school year.

Construction updates can be found by visiting https://d86.hinsdale86.org/domain/425.

Walsh said the improvements elevate both the aesthetics of the school and its functionality to help everyone reach their potential.