New tot lot might be open for kids today 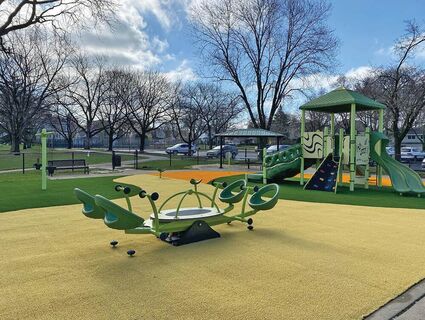 The Irma Butler Tot Lot outside The Community House boasts a new seesaw, slide tower, swings and picnic table and shelter. If work is finished on time, the playground will re-open today. (photo provided)

If all goes as planned, today will be opening day for the refurbished Irma Butler Tot Lot outside The Community House today.

And students at Hinsdale Community Preschool, housed in The Community House, are ready to test it out, preschool director Ann Marie Berlino said.

"We are delighted that it's ready to go," she said. "Looking at it with the doors locked is so hard."

The $175,000 project initially was slated for completion two years ago, said Heather Bereckis, superintendent of parks and recreation for the village.

"It was scheduled originally for work to be done in 2020," she said. "Because of COVID, we held off on our capital projects that year."

Work started in 2021 but supply chain issues prevented the new playground from being installed last fall as anticipated.

In addition to new equipment, the lot will have a new artificial turf surface.

"We thought turf was a good option," Bereckis said. "If we continue to like it at this playground, we probably will continue with turf at all the other playgrounds."

"We've had a lot of conversations around the equipment that the men used and the digging and the grassy area," she said. "They are quite inquisitive about the grassy area. They can't wait to get their hands in there and feel it."

"When I took over parks and rec, there wasn't a playground replacement plan in place yet with the village," Bereckis said.

Parks have been listed in order of age and use, with community parks taking priority over neighborhood ones.

"There's some flexibility in this," Bereckis said. "We moved up Burns because it is so heavily used."

Brook Park, which was renovated in 2007, is the last on the list, slated for replacement in 2035.

Playground equipment has a life span of 15 to 40 years, Bereckis said, depending on how well it is maintained.

"We're trying to hit right around that 20- to 25-year mark," she said. "The longer you push, the harder it becomes to find replacements as things break."

Most of the changes in playground design have to do with safety, she noted. The village also is working to incorporate pieces that can be used by children of all ability levels at every park.

"Hinsdale doesn't have a specific all-ability playground right now," Bereckis said. "We want to make sure we're being thoughtful in that process, so anyone who comes to that playground has something they can engage in."

Berlino said staff members are happy the lot has a new gate, as even the 2-year-olds could open the latch on the old one.

"We can't wait to get in there and get playing," she said. "It should be a lot of fun."