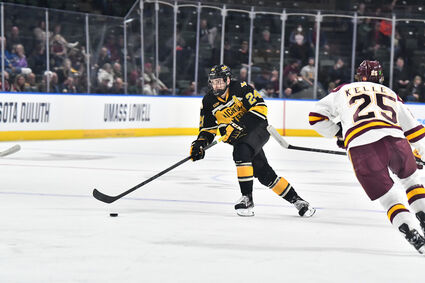 Hinsdale's Colin Swoyer had just played in the NCAA tournament for Michigan Tech before learning he would embark on a pro journey after getting a one-year deal from the Pittsburgh Penguins. "I think things worked out pretty well," Colin commented, saying not being drafted at a younger age was beneficial. "I've had to work hard to develop, and now it gave me more options." (photo courtesy of Michigan Tech Athletics)

He tried his mom again. No luck.

"So I just walked out of my room and told my roommate," he said.

Colin, 23, would eventually connect with his family, of course, to let them know he was bound for the Penguins' AHL affiliate in Wilkes-Barre/Scranton, Pa.

The Penguins' offer took the sting out of the defeat Tech had suffered a couple of days earlier in the NCAA tournament, bringing his college career to a close.

"My agent basically just told me the news. We kind of discussed some things, and I thought the it was the best fit for me," Colin related. "It's really exciting because my whole life I've obviously worked for this, and just for this to happen the way it did is really cool."

Reaching the pro level was certainly a nice consolation to missing out on a national championship. Colin said he is thankful for his pathway, a longer road than if he had been drafted in his teens.

"I was pretty small until my senior year of high school," he said. "That (time) has really helped me develop into an offensive player and gain other skills."

That development garnered him Tech's Gitzen-Loutit Memorial Award the last two seasons as the team's most outstanding defensive player. He set career highs this year in goals (5), assists (18) and points (23) in his 36 games. His 23 points were tied for fourth-most on the team while his four power-play goals were second-most. His junior year he led the team with 53 blocked shots to rank eighth in the nation.

Colin said his time at Tech transformed his game.

"I learned the defensive side of the game and developed pro habits daily," he said. "I also put on some weight, from 165 pounds to 190 pounds."

Michigan Tech head coach Joe Shawhan told The Hinsdalean that he was advised to recruit Colin by one of his former players, Al Dorich, who was coaching the teen.

"I remember telling Al after the first game I saw Colin that I felt he should shoot the puck more. The next game he probably had 10 shots on goal and dominated play. I told Al that I'd seen enough and quickly offered him a scholarship," Shawhan related.

His dad Jim, director of the Hinsdale Central Hockey Club, said his son's chance with the Penguins is a result of his hard work.

"Ir's a reflection of what he's done over the last six years," Jim remarked, saying his son's work ethic bore fruit in the form of the NHL contract. "This was always a possibility. And then in happened. We're big believers that adversity is a big part of the process of development."

Colin said he is indebted to his parents and his sister and brother for their support as he pursued skating success as a youth.

"My whole family sacrificed so much for me to be where I am, just going on road trips, taking away time from them doing other activities," he said. "Without them I would not be where I am."

Prior to his collegiate career, Colin played his freshman year at Central then moved to the United States Hockey League with the Chicago Steel and Sioux Falls Stampede. In his second season in 2017-18, Swoyer finished fourth in USHL scoring among defensemen and fourth among all Stampede skaters with 36 points.

He is gratified that his family's sacrifices are paying dividends.

"They were pretty thrilled, pretty excited," Colin said. "They're just as involved as I am in this process."

Jim even drove his son's car to Pennsylvania so Colin could fly.

"It's about the journey. It's not about where they end, You've got to embrace and enjoy the journey," Jim said.

Colin describes himself as "a two-way defenseman who can play in any situation."

"Colin grew in all aspects on and off the ice. He was a two-time all-league player that also served as a team captain. He was tremendous in the classroom and in the locker room - a perfect example of a student-athlete and someone admired and respected by his teammates," he said.

In Wilkes-Barre, Colin said a typical day starts with a team breakfast at 8 a.m., team meeting at 9:15, workout and skate until lunchtime and then home to study as he finishes work toward his business degree.

Going from watching pro players to learning from their habits to now be playing in the same league as them is surreal, Colin said.

"There's a good mix of guys here, from like 10 years older than me to 4 years younger," he said.

Being a newcomer on an amateur tryout contract, Colin understands he'll have to pay his dues and earn his ice time. But he's no stranger to hard work.

"It's definitely a challenge to get in the lineup," he said. "Obviously I want to contribute as much as I can."