First show of new season fit for a king 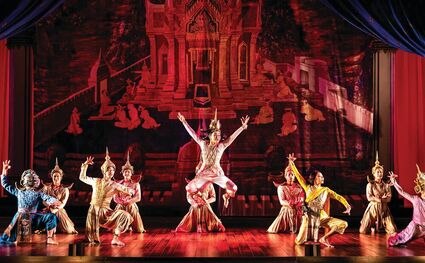 Adam Jacobs and Betsy Morgan play the King of Siam and Anna Leonowens, and Paulina Yeung is Tuptim in "The King and I" on stage at Drury Lane Theatre in Oakbrook Terrace. The production's set design, costumes and choreography all contribute to the musical's success. (Brett Beiner photos provided)

Some 71 years after "The King and I" opened on Broadway, the is launching the 2022-23 season at Drury Lane Theatre in Oakbrook Terrace.

How well does this Rodgers and Hammerstein classic - originally starring Yul Brynner and Gertrude Lawrence - stand up to the test of time?

Director Alan Paul in his Playbill note to audiences said he believes that with the current clash of cultures in 2022 America, the musical continues to resonate.

"Revisiting the musical, I was surprised by how directly it deals with social and political change," Paul wrote. "We see an uneasy portrait of Siam grappling with its past and its future.

"Demonstrations of hierarchy are everywhere in 'The King and I,' from "The March of the Siamese Children," where the children bow in supplication, to the powerful finale, when Prince Chulalongkorn denounces this custom of 'bowing to King in fashion of a lowly toad,' " he continues.

The musical, based on "Anna and the King of Siam" by Margaret Landon and inspired by true events, tells the story of Anna Leonowens, a widowed schoolteacher from Wales who travels to Siam to teach the king's children in the 1860s. The King's many offspring - and his many wives, whom Leonowens also instructs - are open to ideas of the west. The King is, too, but finds himself too entrenched in tradition and his own insecurities about ruling his country to fully open his mind and heart to change.

Betsy Morgan as "Mrs. Anna" and Adam Jacobs as The King effectively portray these characters who live in different words from one another (and from audience members), embracing the humor in the script to make their unlikely connection more believable in the 21st century. 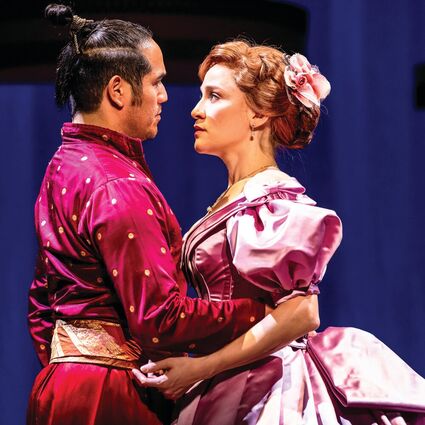 The stunning and talented Paulina Yeung as Tuptim is a highlight of the show, as are the many young actors who portray the Royal Children.

The show features favorite songs like "Shall We Dance?" and "Getting to Know You," but some of the less familiar numbers, including Ethan Le Phong and Yeung's "We Kiss in the Shadows" and Christine Bunuan's "Western People Funny" are true delights. Morgan deftly handles what could become an over-the-top rant in "Shall I Tell You What I Think of You."

The original Broadway production - which ran for 1,246 shows - was nominated for 13 Tony Awards and won five, including best musical honors. Drury Lane's rendition reminds audiences of all there is to love about this classic.

Tickets: $64 to $79, with senior citizen discounts and dining and show packages available; subscriptions start at $170.