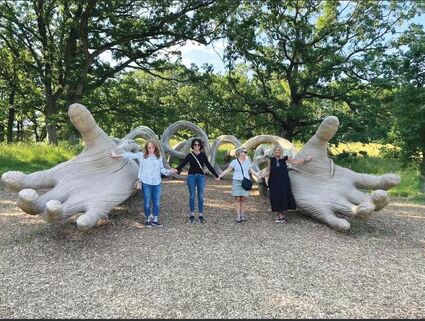 Hinsdale neighbors Nerida Thomas, Marnie Joy, Ali Guinta and Jodie Brubaker have met every Tuesday throughout the pandemic. When weather - and infection rates - permitted, they enjoyed some field trips. One was to the Morton Arboretum to see Daniel Popper's sculptures. Another was to Panama City, Fla. (photo provided)

A group of four neighbors met for a drink one afternoon two years ago, with no idea how significant the gathering would become.

"Jodi, on a random Tuesday, it was sunny, all our husbands were away, said, 'Do you want to go to Fuller House?' " Nerida Thomas recalled. "We walked. That was the start one."

A week later, the world had shut down due to COVID-19.

Thomas, Jodi Brubaker and Marnie Joy, all of whom live on Grant Street, and Ali Guinta, whose house is around the corner on Vine, decided to continue to meet weekly, calling their gatherings "Tipsy Tuesday." To keep everyone safe, they met outdoors.

"We thought, 'Oh, we'll just do this for a few months because that is how long a pandemic will last," Thomas said March 22. "Here we are, 106 Tuesdays later."

"We truly sat six feet apart outdoors in our parkas," Guinta chimed in.

"That was the whole idea. We brought our own chairs," Joy said. "We brought our own drinks. It was supposed to be easy. It didn't matter what you wore. The person who had it didn't have to do anything to prepare. We didn't even go in to use the bathroom."

Some gatherings were on the back patio, others on the front porch. Joy and Guinta each bought plastic enclosures and placed them in their backyard.

Three of the women had known each other since their kids were in kindergarten at Monroe School. Thomas joined the group after moving here from Australia in 2010. Their oldest children were all high school seniors when the pandemic hit. Helping their kids through that time was one of their early topics of discussion.

"I don't think they really saw it all coming," Joy said of the teens' reaction to the shutdown. "I think it was just a shock to them as it kept rolling out, and they just kept losing more things. It was the loss of their sports seasons, spring break, graduation, prom."

Guinta's son, a baseball player who missed his junior year due to injury, lost his senior season to the pandemic. And that was after he made the choice to give up football in the fall to get ready for baseball.

"He missed three of his sports in a row, which was rough for him," she said.

With each difficult moment the encountered during the week, the friends knew every Tuesday afternoon they had a place to share their frustrations.

"We got to get together once a week and talk about it, whether it was how angry we were, how sad we were, how relieved we were," Guinta said. "It was just a way to get through it initially.

"It's nice to have three other people that know exactly what you are going through, and once a week you get to just get it out there," she added. "You can cry or complain or be in a bad mood. It was kind of the safety place to just get it all out there and get through it."

Over the past two years, the friends have gone through a host of challenging life experiences, from husbands' job changes to health scares to the loss of beloved pets to the death of a parent.

"When my son left for college two weeks earlier, they were all crying. He said, 'I knew that was going to be the last time I saw him'," she recalled.

"We still haven't had a memorial service for him," she added. "I think about that all the time. We kept waiting for everyone to get vaccinated and then for it to be summer so we could have it outside."

Tears were shed some Tuesday afternoons, but the friends also shared a lot of laughter. After lunch at Blanco one December Tuesday in the "Holiday Edition" gathering, the friends went to Restoration Hardware. Customers who buy a glass of wine can sit in any of the display rooms in the store.

They also tried to incorporate some activities when they were meeting at a home.

"We bought latch hooks but we didn't get too far," Joy said. "We discovered after five or six pieces of yarn it was as boring as when we were 12."

The group celebrated the two-year anniversary of their first meeting by walking to Fuller House last month.

"It was a beautiful day just like the first day," Guinta said.

The weekly meetings have given the women the opportunity to develop a special kind of friendship.

"How many hours have we spent together?" Brubaker asked. "One hundred and six times three hours. That's a lot of hours."

Some friends and neighbors were interested in joining the weekly gatherings, they said, but the four preferred keeping them small and intimate.

"We know that we can really share things here and it doesn't' go anywhere else," Joy said. "You can be vulnerable and you can be honest." 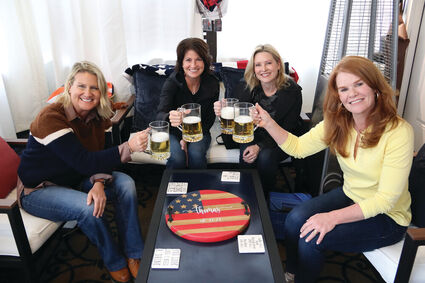 Brubaker, Joy, Guinta and Thomas have known each other since 2010, but their friendships have deepened as they've supported each other through various challenges over the past two years. (Jim Slonoff photo)

"There are certain things I would say here that I wouldn't share with other people," she said. "Sometimes people don't want the burden of it. In a larger group, people want fun times, not the details."

"We call it our therapy now," Joy said.

The friends also had the support of their families, with husbands making dinner Tuesday nights and kids reminding them not to schedule anything on Tuesday afternoons.