Windhover heads off for a face-lift 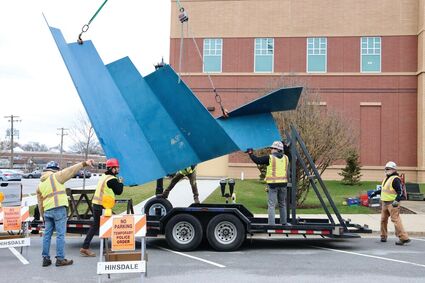 A crew loads the Windhover sculpture on the west side of Hinsdale Middle School onto a flatbed trailer Monday morning for transport to Duraweld in Lake Bluff to be refinished. The outdoor art piece, which has stood along Washington Street since 1976, will be relocated to school's southeast side when it is returned in four or five weeks. (Jim Slonoff photo)

The Windhover has been whisked away from its post on the west side of Hinsdale Middle School for its long awaited makeover.

Well, flatbed-ed away is a more accurate description of how the 4,500-pound fabricated steel sculpture was transported Monday from the east side of Washington Street to a firm in Lake Bluff for a complete refinishing. It was a special sight for Corlyn Simmons.

"It was surreal," said Simmons, a member of the Windhover Restoration Committee. "This has been four years in the process, with the referendum (for the new HMS) and the pandemic in between."

A crew arrived in the morning to unmoor the blue art installation and hoist it by crane onto a flatbed truck. The Windhover, a composition by renowned outdoor sculptor Robert Murray, was a gift to Community Consolidated Elementary District 181 in 1976. Murray has been cited by Pablo Picasso as inspiring his outdoor pieces, and Simmons said the Windhover is museum-worthy,

"We have a Smithsonian piece of art. Mr. Murray is a legend in the outdoor sculpture world," she said. "(Murray) takes pride in this particular piece because it's the only piece of art of his that's at a grade school."

But over time, appreciation of its provenance faded and its condition deteriorated.

"It was a hangout spot for many kids. They called it 'Big Blue' " Simmons related.

She said many HMS alums learned of the effort to renew it and expressed their support.

"The overwhelming remarks from the community have been so positive," Simmons said.

Even Murray, who is now in his mid-80s, was pleased that the sculpture had become a familiar landmark, even if people had no familiarity with him.

"He likes that it was enjoyed by the community, not just off in the distance somewhere," she said.

The $40,000 project, which involves the sculpture being stripped and recoated with weather-resistant paint, is expected to take four to five weeks. The Windhover will return to a new site on the school's southeast lawn by the Third Street entrance. A rededication ceremony has tentatively been scheduled for the morning of Tuesday, May 17. A crew poured the new concrete pad last week.

"It'll be nice that it's protected by the walls of the school," Simmons said of the site. "It will still be in an area that the community can walk by and enjoy it.

"(The ceremony) is going to be another opportunity for the community to take pride in coming together again 45 years later for the refurbishing of this significant piece of art," she added.

Murray will record a special video for the students as part of the festivities.

"Finally it's happening, so it was wonderful," she said.