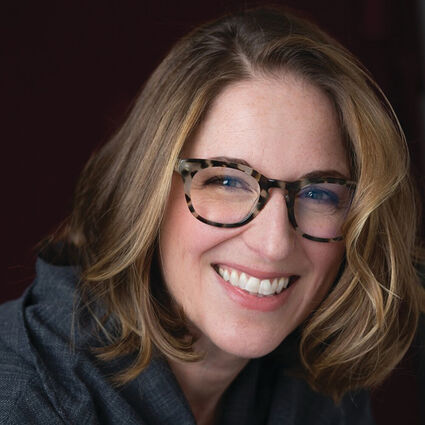 Jessica Lahey began her talk as part of The Community Speaker Series Monday night sharing some details about her own journey to sobriety.

She quit drinking in June 2013, prompted to seek help after she drank so much at her mom's birthday party that she blacked out. The next day her dad confronted her with a truth she already knew. She was an alcoholic.

With addiction on her husband's side of the family as well, and as the mom of two kids, one question arose during her sobriety.

"How on earth do I make this end with me or increase the chances that this ends with me?" she said.

She read that substance use disorder, the new preferred term for addiction, is a preventable public health crisis.

Her latest book, "The Addiction Inoculation: Raising Healthy Kids in a Culture of Dependence," is her answer to that question.

Children of parents who have substance use disorder are 50 to 60 percent more likely to develop it during their lifetime, she said.

"But that doesn't mean they're going to," she said.

The key, she said, is prevention. She used the metaphor of the scales of justice. The greater the risk, the more parents will need to focus on prevention, she said.

Other risk factors for kids fall under the category of "epigenetics," which is a new field of scientific inquiry. Life experiences can cause genes to turn on or off, she explained, meaning kids' environments can have a powerful effect on their brains.

Youth who experience academic failure, social ostracism, aggressive behavior toward other children or an undiagnosed learning difference are at higher risk for substance use disorder. Children who are treated successfully for ADD or ADHD actually have a lower risk of developing substance use disorder during their lifetime, she noted. Other risk factors include the death of a parent, divorce, violence in immediate surroundings and suffering physical or mental abuse.

Adolescents, who have lower levels of dopamine than younger children or adults, crave risks - especially when in the company of their peers.

"If we want to prevent substance use disorder in kids, we have to give them opportunities to feel competent, to have mastery, to feel self-efficacy," she said.

Risks for substance use disorder include a lack of self-efficacy and a lack of hope.

A plan for parents

What are parents to do?

"It's really about giving your kids really good information rather than the information they glean for themselves," she said.

Begin young, she suggested, talking with kindergartners about why toothpaste is good for brushing teeth but not good to eat, and why it's never a good idea to take someone else's prescription.

"Start early and just like the sex talks, the drug and alcohol talk gets easier the more often you do it," she said.

Letting teens know how much more harmful drugs and alcohol are to the adolescent brain also is critical, she said. Adolescence is the second most significant stage of brain development after the first two years of life. That period of plasticity makes the brain particularly vulnerable to chemicals ingested and environmental experiences.

"There are a lot of drugs and alcohol that we can take as adults that can do some damage to our brain. That same risk is a much higher risk to adolescents," Lahey said.

The risk of alcohol use disorder drops from 50 percent if the first drink occurs during eighth grade to 17 to 20 percent if it occurs in 10th grade and 10 percent if it is in 12th grade or later.

"The very best substance use disorder programs in schools are social-emotional learning and life skills courses with a health component to them," she said.

She encouraged parents to look for allies in school counselors, school nurses and primary care physicians, all of whom can provide information and screenings for teens.

Just one adult they can connect with makes a big difference to teens experiencing trauma, she said.

"Those kids are far more likely to have positive life outcomes than kids that don't," she said.

She does not endorse giving kids sips of alcohol or hosting parties and taking kids' keys to keep them safe.

"What I know now is that parents who have a consistent and clear message of, 'No, not until it's legal for you,' have kids with far lower rates of substance use disorder during their lifetime," she said.

She does not believe parents must abstain in front of their kids but encouraged them to use moderation and think about the messages they send about drinking.

"When we let our kids hear from us that the way we deal with negative emotions is by numbing them out, they are going to follow suit," she said.

"I drank because I had just overwhelming anxiety and in the short term, it really worked on my anxiety. The problems is that alcohol in the long term exacerbates anxiety," she said.

Parents need not feel a sense of doom, she said.

"The most important piece of all of this is it is not inevitable that kids will use drugs and alcohol," she said, even though most people use at some point in their lives. "Lots and lots of people can try drugs and alcohol and never get addicted."

Jessica Lahey, author of “The Addiction Inoculation,” suggested these five steps for parents to help protect kids from substance abuse.

Model healthy behaviors for your kids

Conversations about drugs and alcohol need to start with talk about health and safety when kids are very young.

Use a kid’s interests to find the side door into the conversation so they will engage in a two-way discussion.

A belief in the ability to cope with challenges — and ultimately succeed — comes from trying, doing, failing and trying again.