Teams get into the spring swing 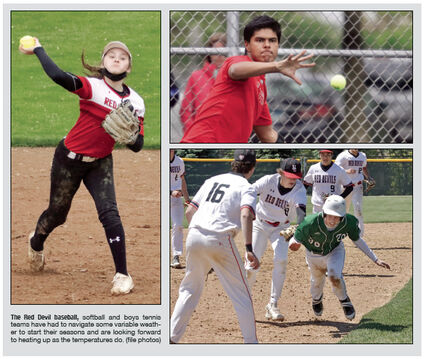 Make good contact and steady improvement. That's what Hinsdale Central's baseball, softball and boys tennis teams aim to do this season, as all three hope for extended postseason runs. The coaches for each program share their thoughts on their respective 2022 campaigns. This is the final installment of a four-part series.

Team strengths: The guys have really good energy and are very competitive, I think they understand what's at stake. We've returned 10 or 11 seniors and six position players that started last year. We have three really big strengths. First, our pitching is really good. We have three guys who can really throw it and compete on the mound. And that makes your defense look good. Second, we have guys up and down the order that can really hit and put charges into balls. And third, we really run the bases aggressively and can run ourselves into a lot of runs both with speed and by seeing opportunities to be aggressive.

Areas for growth: It's the little things that we want them to do better (on). We're focusing on moving runners in important situations by bunting effectively and having good approaches at the plate to put runners in position to score by not striking out or having unproductive outs.

Who to watch: senior pitcher/infielder Luke Adams is our most talented player and has the potential to be drafted by a Major League club. Senior Blake Edmonds is our captain, very good in all phases and a great leader on and off the field. Senior Lucas Montesantos, pitcher/outfielder, was the conference pitcher of the year last year. He's got electric stuff. Junior Ben Oosterbaan will pitch and play shortstop and is one of our top guys. Senior Harry Fandre is our first baseman. Luke Jurack was maybe our best overall hitter last year as a freshman - I never had a freshman start on varsity before.

Season outlook: We accomplished our initial goals last year by winning our conference and winning regionals. We want to do the same this year as well as win our sectional. Any team that wins the state is going to need some luck. We're certainly one of the best teams in the state and definitely a contender to win the state championship. I think we're going to be right there in the end.

Team strengths: I like the diversity of our team. In years past, our performance was a job for girls who had been with the program for a while. This year we are looking for contributions from freshmen through senior girls. We have a little more depth and a different feel than what we have seen in years past. We have a group of kids who truly love the game of softball, and it's so refreshing to be able to coach that. We have a lot of high-energy girls, a lot of talent, and we have strong girls.

Areas for growth: One place I always want to see us be successful is on the mound, We have two veteran pitchers and a new pitcher, so I'm interested to see how the three pitchers gel together. Our infield has a lot of veterans coming back, but we have kind of a new outfield, but I'm not worried about it. Offensively, you never know until the first game what you're working with. I'm excited to see what we can bring to the table. It'll be fun to see it unfold in our first game.

Who to watch: Senior pitcher Kaila Kuo, senior infielder Brooke Bauer, sophomore Maisie McDaniel is expected to be a good asset at the plate, junior utility player Allie Diaz, and sophomore Naomi Cook is taking on a leadership role.

Season outlook: Last year was a season of many ups and downs. Our goal this year is to be able to walk away from games knowing we gave it our best shot, win or lose, which I think is something we did not always see last year. I want us to all be on the same page.

Team strengths: I like our depth. We are very good at every position. We have four kids who were in the state lineup last year. We have 12 seniors and six freshmen on the varsity. So we've got experience, but we're also reloading.

Areas for growth: Certainly we expect our freshmen are going to develop. Our four returning state players have been through the grind of state, and we look forward to their leadership with the freshmen. We're absolutely in the exploration stage right now in terms of who will play where. It's too early to know that right now.

Who to watch: Senior captains Noah Hernandez, Dean Kamenev and Mujtaba Ali-Khan and senior Jai Vallurupalli. They're all absolutely enormously talented and are going to lead us if we are going to win state. Sophomore Alex Kotarski is aggressive in his doubles play and infuses us with a lot of energy, Brothers Noah, Aidan and Nathan Hernandez are all on varsity - I've never had three siblings on varsity before. Senior Luca Lipari has very patiently been waiting for an opportunity, and we hope for big things for him.

Season outlook: I can't remember a year we've been quite so strong. We intend to be in the mix on the last Saturday in May (for the state title), that's a promise. We've already played (top rival) New Trier and beat them. We're going to be determined and ready and hungry.