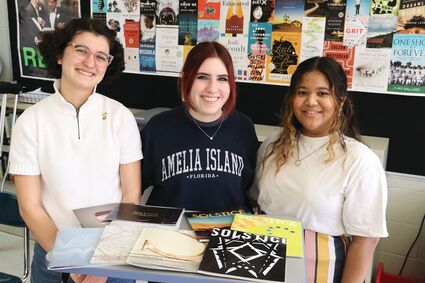 Sara Quiballo joined the staff of Hinsdale Central High School’s art & literary magazine, “Solstice,” with few expectations. But she’s leaving with accomplishments, memories and friendships that will last a lifetime.

“I had no idea what they did,” said Quiballo, who joined the activity as a freshman at the urging of a friend. Three years later, the senior is head director of the publication, which just earned its second Columbia Scholastic Press Association Gold Crown award in as many years. The Gold Crown award is the highest recognition given by the CSPA for overall excellence in a student publication. As in 2021, “Solstice” was the only high school literary magazine in Illinois to earn the honor this year.

The 2020-2021 edition of “Solstice” is a 50-page publication titled “Monumental.” It showcases the creative works of dozens of Hinsdale Central High School students and includes short stories, poetry, photos, paintings and drawings. Three-dimensional art forms such as ceramics and jewelry are included, too.

As the staff received word March 18 of the publication’s second Gold Crown award, work on the 2021-22 edition of the literary magazine was well underway.

“It takes most of the year to complete,” said design manager Zuzanna Sokolowski, who will take over as head designer of the student-led project next year.

“Everything from the color scheme to the pieces accepted is decided by Hinsdale Central students in “Solstice,” she said.

English Teacher Angelique Burrell has served as faculty adviser for the “Solstice” staff for five years, but she said she leaves the bulk of the work and decision-making to the students.

Committees of student staff members are currently making the final selections before beginning the process of printing and distributing the 18th edition of “Solstice.” Submissions are open to any Hinsdale Central student, and Sokolowski and head literary editor Lauren Peters said they’re constantly impressed and even surprised by the talents of their classmates.

Artists and writers don’t always get the attention that students in other activities enjoy, “Solstice” staff members said. The magazine is a chance for students to share their abilities with the entire school. In an effort to attract more submissions, members of the staff visited art and writing classes early in the school year, urging talented classmates to share their talents. That’s something Quiballo said she couldn’t imagine doing just a couple of years ago.

“As a freshman I didn’t speak two words to a stranger,” she said. Now, she talks to new people every day. “Those skills have absolutely skyrocketed,” she said, and will no doubt help her as she pursues a double major in

Sokolowski said her love of graphic design drew her to “Solstice” her sophomore year. But it’s her fellow staff members who have kept her there.

“I’ve made a lot of close friends in this club,” Peters agreed.

Now a senior, Peters also joined “Solstice” as a freshman. She said she’s become a better writer through the process of critiquing her classmates’ work. Sokolowski agreed that the process of respectfully and thoughtfully critiquing student submissions has made her a better artist and opened her eyes to the talents of others. As head director, Quiballo is the only member of the staff who knows the identities of the artists during the selection process.

“When we get the finalized and finished submissions for “Solstice,” it’s just so amazing to see what people our age are doing,” Quiballo said.

A member of the school’s poetry team, part of Peters’ job as head literary editor is to write the poem reflecting the theme for the 2021-22 edition, “Sunny Side Up.”

“We really focused on looking at the bright side of things,” Quiballo said of the magazine’s 18th volume. She said readers will notice a lighter feel than in recent editions, with brighter colors and a fun design. It’s no coincidence, she said, that the lighter, brighter theme comes as Sokolowski prepares to take the reins.

“I still have a ways to go before I’m ready for that, but I’m excited to work toward being head director and learn a lot along the way,” she said.

And while Sokolowski and the rest of the “Solstice” staff would welcome a third Gold Crown next year, the senior said she is most looking forward to another year working and creating with the “Solstice” team.