Library retiree will take time for books and grandchildren 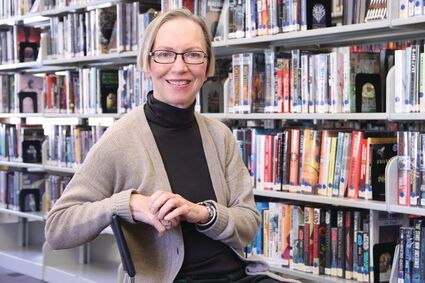 What started as a part-time job at the Hinsdale Public Library became a career for Ellen Smith - a career that will end with her retirement on March 31, exactly 25 years after the day she first reported to work at 20 E. Maple St.

Smith was a single mother between jobs in 1997 when a friend, Hinsdale resident and former children's librarian Barbara Delongis, suggested she take a position in the library's technical services department. Now known as collection services, Smith's job was to order and process all of the materials coming into the library.

"We used a card catalog and a typewriter," Smith said of her early days at the library. As new books and materials would arrive, she would type up the cards that would track their circulation.

As computers began to replace paper and typewriters, Smith's role at the library changed, too. In the early 2000s the library's new director asked her to become head of technical services. Later, she would add building and acquisitions manager to her resume.

That first job at the Hinsdale Public Library fit well into Smith's life at the time and was even in walking distance from her Victorian home at Hickory and Lincoln. It also fit her skill set.

Smith's career in the library science field is even longer than the 25 years spent in Hinsdale.

"I have a background in library science," said Smith, who earned a degree in history before studying library science at the University of Chicago. Throughout her college and graduate school careers, Smith worked in university libraries.

Smith's role within the Hinsdale Public Library changed over the years, and so did the library's role in the community. While it's still a place for people to find books and conduct research, it's also a gathering place and a resource for groups and organizations throughout the community.

"I really believe in the work that libraries do," Smith said. She said libraries are essential not only to communities, but the free access to information provided by libraries is vital to democracy.

As Smith prepares to close the book on her long career, her plans for retirement include spending more time at her grandchildren's swim meets and activities, time to volunteer in the community and work in the yard of her Clarendon Hills home, and of course, more time to read.

A lifelong reader who lost herself in books even as a child, Smith prefers historical fiction and biographies. Although she's loved many books over the years, "The Splendid and the Vile" by Erik Larson remains one of her favorites.

"It's just fascinating," she said of the novel's portrait of Winston Churchill's leadership during World War II.

One perk of working in the public library is the chance to see what's new and to get your name at the top of the wait list for the most popular titles. And although Smith said she will miss that privilege, it's the people at the Hinsdale Public Library that she will miss the most.