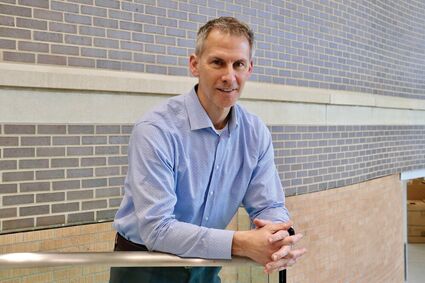 Christopher Freiler said his study of history has helped to shape how he sees the world, and he hopes his AP European history class and exam prep guide help students do the same. (Jim Slonoff photo)

What is your teaching philosophy?

In a press release announcing the third edition of Christopher Freiler's AP European history exam prep guide, publisher Sherpa Learning calls the book "the pinnacle of excellence in AP Euro test prep resources." Students, according to the publisher, refer to the book as the "Freible". Yet despite these and countless other accolades, Freiler resists being called an expert.

"I try to avoid the use of the word expert," said Freiler, who has taught at Hinsdale Central High School for 29 years. After three decades in the field, Freiler said he still considers himself a student of every subject he teaches.

"I teach with a healthy dose of skepticism," he said, and an equally healthy appetite for knowledge.

Freiler began teaching at Central in 1993 and taught his first AP European history class in 1997, one year before joining the AP test development committee and becoming a College Board consultant. Freiler participated in the redesign of the test in 2016, which created the need for a second edition of his book. Further changes led to a third edition in March 2021, just in time for the spring testing season.

Unlike some study guides, Freiler said his is intended to teach students the skills needed to be a historian.

"Some are more geared toward last-second studying," he said.

AP European history covers the events of 1450 to the present, but Freiler said the course isn't just about learning names and dates. Students study how factors such as politics, economics, culture and lifestyle affect history and vice versa. Success in the course requires skills that go beyond memorization, Freiler said. Students must be able to interpret the information and use it to form theories and opinions and to support arguments.

The 195-minute AP exam includes multiple choice questions, as well as essays. The document-based question can be a challenge for many students, Freiler said. Students are given 60 minutes to support an argument using information they learned in the course.

"It's actually a pretty hard task," he said.

"It's a high stakes test," Freiler said. A student's score affects not only their grade point average but their potential to receive college credit for the class.

Freiler said he started college as a business major, but later decided to indulge his interest in history, switching his major to political science and history. Freiler said his knowledge affects the way he sees the world and the news of today. It also shows him what he doesn't know.

"Teaching this course reveals to you very quickly your areas of ignorance," which in Freiler's case, was art. He chose to remedy the situation by diving deep into a study of art, which he now uses as a form of therapy.

"It transports you out of your small surroundings," he said.

As a College Board consultant, Freiler said he's seeing a real emphasis on diversity and inclusion, with efforts to make his and other AP classes more accessible to more students. History doesn't change, but the way it is taught does and future revisions of the "Freible" can't be ruled out.