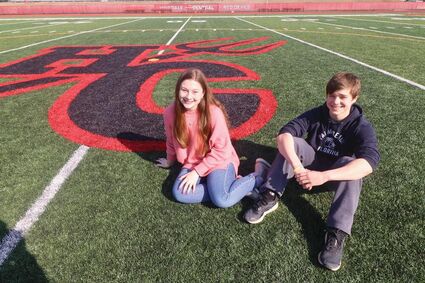 Bridget Kallas and Niko Rhodes hope to raise $20,000 to donate to the Ukranian Red Cross, in part by hosting a run/walk Sunday, March 20, at Dickinson Field. People who can't make it to the walk can send a check payable to Hinsdale Central to the high school with the word "Ukraine" on the memo line. (Jim Slonoff photo)

When Hinsdale Central student Niko Rhodes learned Russia had invaded Ukraine, his first thoughts were of how to help the people there - including members of his own family.

He has relatives in both countries on his mom's side of the family, and his stepmom and two young half-sisters were in Kyiv at the time of the invasion.

"They couldn't drive out because the traffic jams to the west were so massive," he said. "Buses, same problem. Trains were not running, or the train stations themselves were super crowded."

Rhodes said he had just arrived home from a mock trial tournament at 7 p.m. on Feb. 24 when his mom told him an uncle who used to work in Ukraine intelligence said the invasion was expected to begin.

"Around two hours later, at 9 o'clock, the headlines started rolling in," said Rhodes, who lives in Clarendon Hills.

The initial hope was that the Russians would stop when they reached the Donbas region in southeastern Ukraine.

"Then they bombed the airports, so we knew it wasn't just Donbas," he said.

By day three of the conflict, Rhodes had decided to launch a fundraiser at Central to support the work of the Ukranian Red Cross.

"The initial plan was just to collect during classes, to have the teachers hold onto envelopes and give a little pitch and have students involved give pitches in their classes," he said.

Then his girlfriend, Bridget Kallas of Hinsdale, had an idea.

"I was part of Habitat for Humanity and I know they had a lot of success with the 5K they do in the fall," she said.

She spoke to a number of people at Central who helped her plan the event, which is set for this Sunday, March 20, at Dickinson Field. Check in is at 8:30 a.m., and participants will walk around the track from 9 to 10 a.m. Everyone is asked to wear yellow and blue to show solidarity.

"People at the school have been very willing to help," she said. "It's been nice having support at the school."

The minimum donation to participate is $20, but Kallas and Rhodes hope people will contribute more. They also plan to sell mini-doughnuts at the event. Their goal is to raise a total of $20,000 for relief.

"I've given pitches to all my classes about what I'm doing, my story, and teachers are giving me the opportunity to step out of class for a minute to go talk to other classes if I want to," Rhodes said.

The two also have partnered with the Citizen Club at Central to start collecting donations during lunch this week. Students can use cash, a credit card, a check or Venmo.

"When they sponsored us, we got a lot more manpower," Rhodes said of Citizen Club.

The ultimate hope is to raise more awareness about what is happening on the other side of the world.

"It's so easy to distance yourself from the issue because it's so far away and we're not really connected with what is happening," Kallas said.

Rhodes said most students have a cursory knowledge of the invasion, but some have a much deeper understanding. He pointed to John Hines-S, who wrote a recent letter to the editor encouraging Hinsdaleans to offer financial support.

"He's constantly prowling on the news like I am for new information about everything going on," Rhodes said.

With so many disturbing images available on social media, it can be easy for teens to get discouraged, Kallas said.

"They are seeing footage and devastating pictures and they don't know how to help, and we're giving people a way to help," she said.

Rhodes said many of his family members have been enlisted to fight. Others are trying escape. As for his stepmom and half sisters, they eventually made it to Hungary.

"Eventually the trains opened up for a brief window and they were able to get out after a week," he said.

Rhodes and Kallas said their efforts to support Ukrainians will continue even after the run. Rhodes said he is grateful to people for any donation they can make.

"Any amount is appreciated by me, my family and obviously the people of Ukraine that this money is going to," he said.