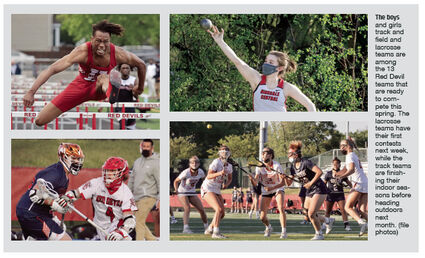 Despite snow earlier this week and in the forecast, spring is almost here. And with it comes a new season for Red Devil athletes in 13 sports and their fans.

This is the first of a four-part series.

Strengths: One of our biggest strengths is our returning members. We returned 17 from last year's team. Our attack as a whole is probably one of the best ones in our conference coming back.

Challenges: I think the challenges we face are continuing to learn the new offenses and defenses that we're putting in. It's a process, it's not a one-year thing. It's a slow build up. The kids need to pick it up as quickly as they can - especially our eight new players. They need to get on it quickly.

Who to watch: Seniors Finn Little on attack; Mark Joy, also on attack; Jack Kearney on midfield; and Tristan Moncrief on midfield.

Furthermore: We're all just excited to be back full time this year.

Strengths: Leadership for sure. I've been coaching here for eight years now, football and lacrosse, and this is probably the best leadership I've ever seen. The seniors, they just have this motivation - it's unlike any I've ever seen. They are really coachable kids. They hold everyone accountable. A few are multi-sport athletes. They get the concept of adversity and how to overcome it.

Challenges: We've had some significant injuries this off-season due to other sports. It makes a lot of the girls sad because good friends of theirs aren't going to be able to play. I think they've done a good job of overcoming that. Externally, you have those teams like Loyola, New Trier, who are top two in the Midwest. Those are obvious challenges. Once my seniors found out about the (USA Lacrosse Midwest Girls Top 10) rankings (Central fourth), they didn't complain, but their facial expressions - they are pretty angry and they want to do something about it. From the outside looking in, that's amazing, but to them that's not good enough.

Who to watch: Senior Tessa Howe, midfielder. She was our All-Sectional defensive player last year. We're moving her to middie due to the fact that she can run up and down the field without getting winded at all. She's got the size, the speed to be a Division I athlete and she is perfect for our locker room. She is on a mission this year. She wants to prove any doubters wrong.

Another is senior Annette Ciupek, midfielder. She was one of our All-State players, probably one of our best all-around players. She's going to U-Cal Berkeley. She is one who took the off-season for us and led the group. What she does on the field is remarkable. She doesn't lose ground balls.

Another player to definitely take note of is junior Reese Napier. She is an Arizona State University commit. She is going to be playing both attack and middie for us, which is something new for her. The way she worked this off-season - her strength, her speed, the velocity of her shot- is going to make her very dangerous.

Another junior to watch is Ari Tavoso, midfielder. She is going to be out the first couple of weeks with a foot injury. Once she's back, she's going to be doing some really nice things. She's probably one of our fastest players.

Another surprise is a junior, Elisa Mann. I think she's one of the most intimidating players I've ever worked with. She's on the defensive side. She's the nicest girl off the field. When she's on the field, I don't want to

The last one I want to recognize is freshman goalie Makenna Schultz. Watch her. She is impressive, very impressive, and somebody that constantly wants to get better. She's already miles ahead of any goalie I've worked with at this school.

I could essentially name my whole team.

Outlook: We have one goal and that is to win state. That is the only thing that is on our minds right now. We have to take it game by game, practice by practice. We've got a lot to work on. We're definitely off to a better start than last year. These girls want nothing else but the state championship.

Strengths: I would say experience is helpful, with some real state meet experience. That is definitely a strength we hope works in our favor.

Challenges: Just making sure at all levels we can cover all the events in a track meet. I think when teams are deep they can have an athlete cover every event.

Who to watch: We have a pole vaulter, senior, who is coming back. He qualified for state last year. Jack Sauder. And then Dan Watcke, of course, and Colby Revord. On the sprint side, Max Dynis and Emannuel Dorris.

Outlook: We're hopeful that we finish in the top three at the conference meet and get as many kids to qualify for the state meet (as possible). I think that's always our goal, and if we can accomplish those two things, we've had a good season.

No. team members: 90 at all levels

Strengths: It's a fairly large team. I guess the biggest strength is we have a good nucleus of girls back from our distance group, starting with Catie McCabe. Those girls were third in the state in cross country. We have a good group of newcomers that are young, part of our sprint group.

Challenges: Developing the sophomores as track athletes. They didn't run last year - they got caught in that COVID shuffle as freshmen. They never came out for the team. The potential is there for them to be a pretty good group.

Who to watch: Junior Elysse Chandler is a sprinter, hurdler, long jumper, pole vaulter. Maya Reed is a sprinter and she comes from a track history, so she comes in as a fairly well-polished sprinter. Sophomore Keira Leech, she's a hurdler. She came out of basketball, so she just got here. She's a pretty good hurdler. She ran on the varsity last year as a freshman. Hopefully she'll continue to progress.

Outlook: So far we're off to a great start with indoor track. I'm really looking forward, with the indoor championships coming up in March, to see how we place as a team. I'm really excited. I think we're going to do very well. The younger girls mixed in with our distance girls, it should be fun. They're progressing and getting better and starting to believe in themselves.

Furthermore: Their attitudes are fabulous. It's really fun to go to practice. They work really hard.