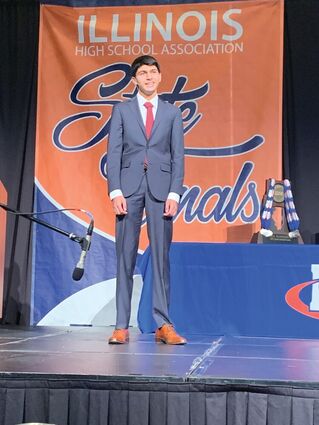 Hinsdale Central sophomore Samir Keswani has done computer programming since age 7. But he wasn't familiar with the Python language before joining the school's Business Professionals of America club this year.

Keswani demonstrated he's a quick learner by earning second place in the Python event at the BPA-IL State Leadership Conference Feb. 23-26 at Willowbrook High School, and qualifying for BPA nationals in May in the process.

Keswani said he was just hoping to make friends through BPA and that the medal is icing on the cake.

"My main goal was honestly to meet new people," he said.

Leveraging his computer science studies at Central, Keswani was able to learn the Python language to communicate instructions to a computer.

"The complicated part is being able to break it down in a way a computer can understand," he said. "Python is pretty general, and it can be used in a lot of different programs."

Execution and speed matter most in the competition. Programmers have 90 minutes, but Keswani said he finished well before time expired.

"It's basically a rubric," he said. "How fast you turn it in is a factor."

"As long as you know what you're doing, it's relatively easy and not that difficult," Keswani added.

Among Central's other qualifiers for the BPA national conference were first-place winners Annette Ciupek in advanced interview skills, Priya Dhananjaya in integrated office applications, and the trio of Annie Ascher, Gigi Gottfried and Cece Lynch as the global marketing team. Seventeen other students qualified by placing between second and fifth in their disciplines.

Keswani spoke of the strong camaraderie on the team.

"On the bus home, we were all discussing how we could have done better," he said.

Community service is also a central element of BPA.

"Everyone that competes has to contribute in charitable way. I held a toy drive with my mom," Keswami related. "It feels good that we were able to give back."

The critical thinking and problem-solving skills he's acquired through the BPA are highly versatile, he said - beyond the fact that he's employed Python to automate the lights in his bedroom.

"I want to take advantage of how many options BPA really has. It very well could determine my career," he said.

The pair took first place for humorous duet acting at the event Feb. 18-19 in Peoria and helped Central earn sixth place as a team.

Kiperman said his close friendship with Huber was a integral factor.

"I think definitely our key to success was just our connection," he said. "Our chemistry together when performing is just unmatched. We just get each other on such a deep level."

They acted out a skit about a job interview in which Huber plays a job seeker, but things go sideways when interviewer Kiperman takes on the character of a psychiatrist. Huber said the several-minute exchange felt very natural.

"We were able to actually talk to each while we're doing it, not just as characters within the script," Huber said.

A speech coach provided the original script, which they refined.

"We added more nuanced movements and reactions. That, I think, is what was able to set us apart," Kiperman said.

Taking first was still a shock.

"That was really crazy just because it was some of the toughest competition that we had seen all year," he related.

"We kind of made this our goal freshman year, and we worked really hard this year to make sure it came to fruition," said Huber, who also earned fifth place individually in dramatic interpretation.

Kiperman, who cites comedian John Mulaney as one of his influences, recalled a Central duo winning the humorous acting category three years ago.

"Being able to fully realize that dream with (Huber) just really felt good," he said.

Huber said being part of speech "was the best decision I made because of the interpersonal skills and the confidence I now have talking with a group of people."

"It was exactly the way I wanted to end it," he remarked.

Junior Ajay Gupta was in "disbelief" when he realized he had captured first place in extemporaneous speaking at the IHSA state speech competition.

"I didn't expect to win, certainly," he said. "It really feels like a culmination of a lot of work over the years." 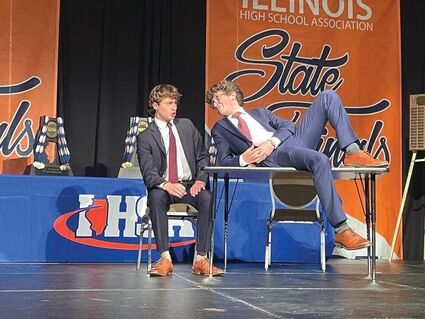 Those competing in the event are given a timely topic and 30 minutes to prepare a seven-minute talk about it. His subject: the Russian invasion of Ukraine.

He credited his teammates and coaches for their support and said the nerves he feels initially give way to adrenaline.

"Personally, I just really enjoy the event, which makes it easy to practice and get better at," he said.

The self-described news follower appreciates the added motivation to stay on top of current events.

"(Extemporaneous speaking) equips you with the ability to be more aware of the world and to carry yourself with confidence."

The team finished third in the performance in the round event and Tess McArdle finished sixth in the humorous interpretation event.