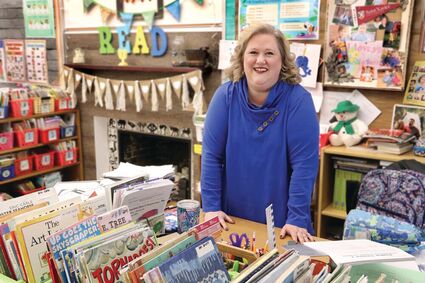 College biochemistry student Carrie Hooper arrived home one day with bombshell news. She had just come from her part-time job nannying for the family across the street and had an epiphany while helping one of the little girls with her math homework.

"All of sudden I was like, 'This is inspiring. I love this!' " related the now Carrie Molinero, who nervously proceeded to tell her parents she wanted to switch her major to education.

Her mom began to cry.

A quarter-century later, that maternal instinct has proven spot on as the Madison School second-grade teacher was recently named South Suburbs Teacher of the Year by the Illinois State Board of Education.

It was Molinero's turn for tears when she learned of her nomination last year laboring in relative isolation as a full remote teacher.

"I literally sat here in the classroom and probably cried for a few hours," she said. "I was like, 'Why me? I'm just doing what I do because I love it and I love these kids.' "

Before Madison, Molinero spent her rookie year of 1998-99 teaching first grade in a neighboring district. At an early grade team prep session a veteran teacher took out her a book of lesson plans. The book was dated 1982.

"She was like, 'I just Wite-Out the dates and write new dates in. It's the same thing every year," Molinero recounted. "I was immediately sick to my stomach. I said to myself, 'Every single year, I will throw my lesson plan book away.' "

Molinero saw the value of emerging digital tools, serving on the technology committees for Community Consolidated District 181 and Madison, through which she helped roll out iPad carts in schools.

But her embrace of traditional methods is just as enthusiastic, evidenced by an impressive classroom book collection that constitutes a small library.

Whether stewarding the school's vegetable garden or pulling out her old college embryology book to explain the life cycle of a chicken, Molinero delights in

"People turn to me and say, 'Aren't you just a teacher?' Well, I do know a little bit," Molinero said with a laugh. "People say that teaching is a science, but it's really more of an art. It's a craft that through time and experience you either get better or you don't."

She recalled an episode years ago when she had taken her class out to Robbins Park for storytime. A former student happened to be walking by and she called out his name. He was shocked she remembered, and she asked what he was doing now.

She praised her Madison colleagues for their invaluable partnership.

"I am who I am because of the people I work with," she said

The 2022 Illinois Teacher of the Year will be named later this spring. Molinero said she already has her prize.

"You do it because you love it and you love being with the kids, helping them learn and grow," she said.