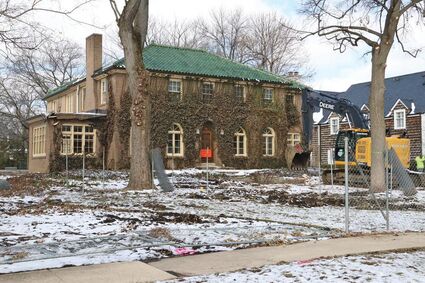 Hinsdale Historic Preservation commissioners expressed anger during a public hearing March 2 on the application to demolish the 1927-built Italianate residence at 720 S. Elm St. and build a new house, having learned that the home's previous owner had held a pre-demo sale, illegally stripping it of items such as a furnace and flooring and rendering it uninhabitable days before it sold last summer.

"It does not sit well with this commission when we're charged with trying to preserve the historic character of this neighborhood and this National Register Historic District (Robbins subdivision), and properties are apparently intentionally treated in this manner," said Commissioner Bill Haarlow, adding that a second-floor window also had been left open, causing more damage.

Commissioner Jim Prisby agreed, referencing a video he saw of the home's interior filmed two years prior that seemed to show it in fine condition.

"It's (the fact of) the house being essentially destroyed on the inside over that two-year period," he said. "It really bothers me, and I just have a tough time, personally, making a motion to say, 'Yep, it's OK.' "

Initially no commissioner would even make a motion to dispense with the application, throwing officials into confusion over how to proceed. The property's new owner, Kevin Callahan, and architect Michael Abraham urged the commission not to punish them for others' actions.

"All we ask is that you vote on the surface of what we presented and what we've done and what the Callahans have done since the time they owned the property," Abraham said.

Commissioners eventually voted against recommending a certificate of appropriateness for demolition but in favor of one for the new construction. The commission's rulings are advisory only.

The site's developer, Hinsdale resident Julie Laux of J. Jordan Homes, came under fire from commissioners for proceeding with demolition activities last month without a permit to do so. She was cited by the village for the violations.

"We'd like to think that our builders and our architects - and certainly our citizens - that are building new homes in the village would find the conscience necessary to respect the village and respect the intent of what the village is trying to do in trying to preserve its heritage," commission Chairman John Bohnen said.

Laux attributed the violation to a communication snafu.

"The minute we were made aware of that, we went over and stopped it," she said. "That was a mistake. You're right."

This case comes against the backdrop of the village's reworking of its historic preservation ordinance, known as Title 14, through which the commission is poised to gain more authority in regulating teardown activity.

Commissioner Sarah Barclay suggested there is often a rush to demolish an older home before evaluating the potential for renovation.

"As a preservationist, it's my job to make sure that we take a breath before we tear down these homes," she said.

Abraham acknowledged that the existing home is a contributing structure to the neighborhood's historic character and endeavored to honor that with his design.

"Which is why we took great care in putting together a house that would fit in with the neighborhood, in terms of scale and material," he said.

Laux said concerns about stormwater drainage on the site had been addressed. Robb McGinnis, Hinsdale's community development director, said that is part of the approval process.

Asked by The Hinsdalean if the village had any recourse against the home's previous owner, McGinnis replied there was not as far as he was aware.

"Trying to find some ground where you can build a new house and yet not have it change the nature of the neighborhood is one of things that we strive to do," Bohnen said.

Hinsdale has had previous cases of vacated homes being left in uninhabitable condition before the issuance of a demolition permit, according to community development director Robb McGinnis, as defined by the International Property Maintenance Code.

“The problem is that in most cases, we never know about it, provided the exterior is maintained,” McGinnis said. “I think the root cause is that no one contacts us when they shut off/disconnect the utilities. If the owner knows it’s being demolished ... they either don’t want to continue paying to maintain the utilities or are trying to get a jump on the work by having them disconnected prior to the permit being issued.”

These are among the features required for a home to be habitable under the IPMC: