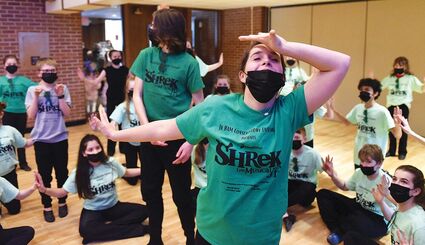 Ryan Coglianeese (center) as Pinocchio does a song and dance with the cast while Mia Angeletti plays the role of Princess Fiona during a showcase performance of "Shrek Jr." at Hinsdale United Methodist Church Feb. 13. BAM's Junior Conservatory Ensemble went on to win a top award with the performance Feb. 18 at the Junior Theatre Festival in Sacramento, Calif. (photos by Steve Johnston for The Hinsdalean)

Twenty-two years ago a 13-year-old Melanie Lamoureux was running summer theater camps out of the backyard of her Hinsdale home.

Last month she took students that age and younger to compete in the prestigious Junior Theatre Festival in Sacramento, Calif. BAMtheatre's Junior Conservatory Ensemble was one of six groups to win the festival's highest award for outstanding production.

"We've always wanted to go and we finally felt like we had a group that was ready to take this on and incorporate this component within the curriculum," said Lamoureux, BAM's owner and artistic director. "We were so excited to go for our very first time. We had no expectations whatsoever. We were shocked and so proud that we were awarded outstanding production."

Twenty-eight students in third through eighth grades performed a 15-minute piece from "Shrek Jr." for the judges.

"Our kids are so dynamic. They have a great sense of humor. We have a lot of variety within our student ensemble," Lamoureux said. " 'Shrek' is a show that really celebrates that."

Alex McCarty, a fifth-grader at St. Isaac Jogues who has been with BAM for five years and played Gingy, said she enjoyed the trip.

"I like my solo and I liked dancing with the other cast members," she said.

For Sophia Sheth, a sixth-grader at Hinsdale Middle School, playing the role of teen Fiona was a highlight.

"I think the funnest part was to see how Fiona grew up while in the tower scene, and it was really cool to have someone younger than me and someone older than me playing the same character," said Sophia, who has been involved with BAM since age 5.

"I just enjoyed how the harmonies were really interesting and hard and how I got to work with people who were older than me and have fun with them," she said. "The tower scene was so much fun because it was so interesting."

The festival also featured workshops, performances and concerts. Alex, Sophia and Caroline all identified the dance workshop as their favorite. They also unanimously named Ovation's production of "Flat Stanley" as the best performance they watched.

Caroline enjoyed watching her friends compete in the Tech Olympics, where they had to complete various costume and set tasks.

"We didn't win but it was still really fun," she said.

Julie Peterson, BAM's managing director, said she enjoyed the opportunity to get to know the ensemble members better and to watch how they conducted themselves both during the performance and throughout the festival.

"We had the adjudicates coming up to us all weekend and congratulating us on our sportsmanship at the festival," she said. "They are just such a good group of kids."

The BAM entourage - which included 36 parents and staff in addition to the 28 ensemble members - did an incredible job of working together, Lamoureux said, noting they like to use the term "BAMily." 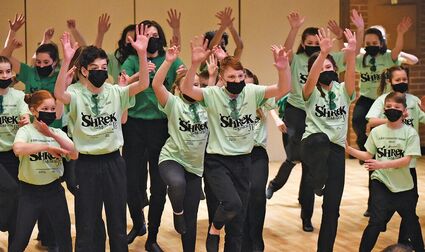 "It's not just a community theater organization where we produce shows and classes," she said. "It really is a kind of a family. It's a community. We celebrate the people involved - the students and the parents alike - and I think everyone is part of that."

Alex's mom Christine McCarty witnessed that spirit while the kids were singing with their instructors around the piano one night.

"It was just a wonderful, wonderful moment to see these kids all coming together with the teachers and having a blast," she said.

Sophia credits the ensemble's success with the devotion of the entire group.

"The directors, the parents, the students, they all worked together and supported each other," she said. "Without that, we could not have won."