Ellis discusses returning to the moon, landing on Mars and many other topics in webinar 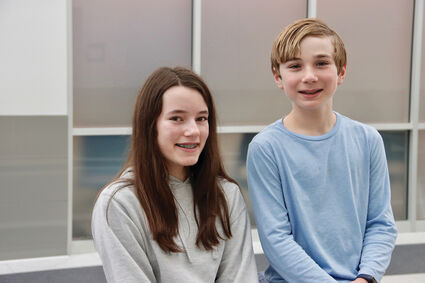 Hinsdale Middle School seventh-graders Taylor Muehlhauser and Connor Mason were two of the eight students who posed questions to Ellis during the webinar. (Jim Slonoff photo)

It's not every day that you get to interview a rocket scientist.

But that's exactly what eight students from Hinsdale and Clarendon Hills middle schools did last week for a District 181 Foundation webinar with David Ellis of the NASA Glenn Research Center in Cleveland.

"I was always really interested in space and wanted to meet an astronaut for a long time," said Taylor Muehlhauser, a seventh-grader at HMS. "I thought it was a really cool opportunity to talk to someone with this professional experience and status so they could tell us what it's like to work at NASA."

The slots were open to all interested middle school students and were filled on a first-come, first-served basis, said Meg Cooper, the foundation's executive director.

"This webinar was not just a speaker that the District 181 Foundation thought would be interesting to D181 students, it was a format designed to give students a 'real world' opportunity of being an interviewer in a live program," said Cooper, noting that students worked with Heather Scott, an HMS language arts teacher.

The students each did research on their own before meeting as a group to choose the questions to pose to Ellis.

"We just had sessions where we would brainstorm and review questions, and we had a session where we all picked a few favorite questions," said HMS seventh-grader Connor Mason, noting the group started with a list of 40 possible queries. They narrowed it down to 18.

Both said they were a little nervous asking the questions on Zoom.

"We couldn't see how many people were watching us," Muehlhauser said. "We tried to present ourselves as best as possible."

Mason said he noticed at one point that the audience was more than 150 people.

"It was pretty stressful to think if you mess up all those people are going to see that," he said. "You have to put your best self forward."

Muehlhauser said she enjoyed hearing about the various components of Ellis' job at NASA, while Mason was most interested in how many planets Ellis estimated might be home to life forms.

Mason said he would be interested in going to Mars if he had the opportunity but worried abou the health risks. Muehlhauser was a definite yes.

NASA's goal to travel there was a repeated theme in Ellis' presentation and in the questions he answered. NASA expects to perform a fly-by mission to Mars around 2035 and to land people on the planet by 2040, he said. 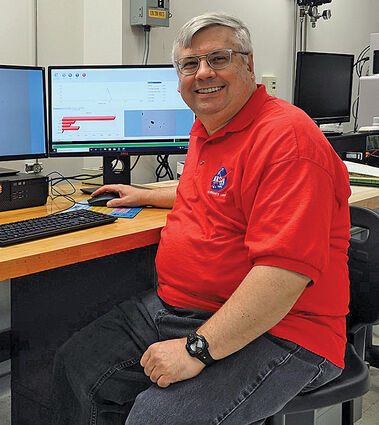 District 181 board member Sinead Duffy arranged for David Ellis, a materials research engineer at NASA, to speak and be interviewed by middle school students in a Feb. 23 webinar. (photo provided)

"You are about at the right age now to be on the first trip to Mars, so think about this in the future," he told students.

First, NASA plans to return to the moon, where it will build an orbiting outpost and a small habitat on the surface.

"I grew up when we were going to the moon," he said. "It was really exciting. Everyone was behind it."

The millions of tons of ice on the moon will be a valuable resource, he said, and the time spent there will enable NASA to get to Mars.

"There is a very good chance we will build the space ship that goes to Mars on the moon," Ellis said. "By 2040 our plan is actually to put people on the surface of Mars."

Having humans on the moon and Mars is an excellent strategy for survival of the species, he noted.

"We know things fall on the earth every so often," he said. "Just ask the dinosaurs."

It is rocket science

Following are some of the 18 questions student panelists posted to NASA rocket scientist Davis Ellis of the NASA Glenn Research Center in Cleveland during a Feb. 23 webinar.

• “Did you ever want to be an astronaut instead of a rocket scientist?”

Growing up in Florida in the late 1960s and early 1970s, Ellis said he saw the Apollo Saturn 5 rockets taking off.

“Back then everybody wanted to be an astronaut,” he said.

“I ended up being a rocket scientist instead,” he said.

“I do a lot of breaking of stuff,” Ellis said.

He describes tensile testing, which is pulling on both ends of an object until it breaks.

“If I know the strength of it, I can tell the designer, who needs that information to make sure something he’s building — a rocket ship or your PlayStation — doesn’t break,” Ellis said.

• “What are the requirements to apply for a job at NASA?”

• “How many G forces do astronauts experience when their rocket ship is lifting off?”

About 3 in the space shuttle and 3.9 in Saturn V, Ellis responded, compared to 5.2 on the Max Force roller coaster at Six Flags Great America.

“You’re actually having more G force (on the coaster) than the Saturn V rocket or the space shuttle,” he said.

• “Do you believe other life forms exist?”

“The answer is yes and that’s pretty much an official NASA answer,” Ellis said, noting that he was not referring to intelligent life.

Something called The Drake Equation, used to estimate the probability of life, estimates there are 125 million potential habitable planets in just the Milky Way.

“I’m hoping personally there is other intelligent life out there, but I cannot say, ‘Yes we have definitively found it,’ because we have not,” he said.

• “What solar system destination are you most excited for NASA to explore in the future?”

Ellis listed Mars; the three moons of Jupiter, Ganymede, Callisto and Europa; and Enceladus, the moon of Saturn.

The moons all have oceans under the surface ice, which means the possibility of liquid water.

“We may very well find our first extraterrestrial life forms in one of these destinations,” Ellis said.