Gymnast, two wrestlers make it to the podium at their respective IHSA competitions 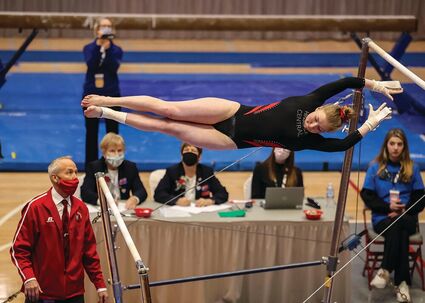 Kelly Klobach earned ninth place on bars and fourth on vault at the individual state gymnastics finals Saturday. (photo by Joel Lerner for The Hinsdalean)

In her first appearance at state, as there was no meet last year, Klobach said she placed higher than she expected with her Yurchanko layout vault.

"Because the competition there was so difficult, it motivated me to really push myself and do the best vault I could possibly do," she said. "That was definitely some external motivation.

"Internally, I think just because it was my last gymnastics meet ever and the last vault I was going to do, I wanted to say I went out on a good note and ended my gymnastics career how I wanted it to end. I think that also was something that was driving me."

Klobach earned ninth with a score of 9.175 in her bars routine. Central varsity girls gymnastics coach Kim Estoque said a change in the way the rotation was created had Klobach competing on bars immediately after finishing her vault.

"The biggest challenge I think in the finals was she had to go right from vault to bars, which I thought was kind of difficult," Estoque said. "She didn't have any down time between the two."

Klobach said at first she was stressed by the scheduling but was able to calm herself down.

"Score-wise it wasn't as high as I would have wanted it to be. Overall, I think the bar routine was pretty good," she said.

Estoque praised Klobach for her efforts all season long.

"She's a great kid. She works really hard," Estoque said. "She deserves everything she got."

Klobach, who has been dominant throughout the season, also competed in beam and floor exercise in the preliminary events on Friday. She said competition at state was stiff.

"I would say the top schools were Prairie Ridge and DeKalb, and we don't usually compete against either of them, so I was seeing them for the first time at state," she said.

"She struggled on one skill, but she just kept plugging away at it and she finished without falling off," Estoque said.

"It really brought back the love of the sport for me," she said.

Landing the final dismount at state was an emotional end to her career as a gymnast, Klobach said.

"I was trying to hold back the tears but I don't think I did too well," she said.

A life-size painting of a podium in the wrestling room at Hinsdale Central reminds athletes of what they are striving toward.

"The expectations are not just to be a state qualifier, but to go down and be All State, which is our ultimate goal," varsity wrestling coach Jason Hayes said.

Ivanisevic and Tavoso met that goal, both placing in the top six. Ivanisevic wrestled with toughness to earn fifth in the 220-pound weight class, Hayes said.

"He's in great shape," his coach said. "He wore guys out. He got them tired in the third period and that's how he won his matches. He had to beat the same kid twice in the tournament, the kid from DeKalb, which is a tough feat to do."

Ivanisevic said he is happy with the improvements he's made since his freshman year. He did not qualify last year for the competition held in lieu of the state meet, which was canceled due to COVID.

"I was really hoping to place higher in the tournament, but I guess my mindset was not ready for that big step up into the state tournament," Ivanisevic said.

He offered thanks to everyone from Central athletic director Dan Jones to his brothers and parents to his coaches at all levels, especially Hayes, Juwan Edmond and Ernest Battaglia. 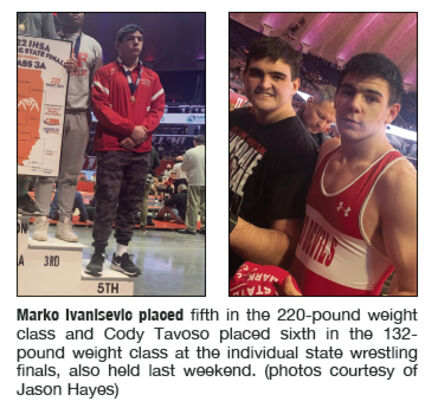 Ivanisevic said the experience will serve as motivation to return to the state finals as a junior - hopefully with more of his teammates making the trip.

"I'm reflecting on it right now, thinking about what my goals are going to be for the next season and what I need to work on," he said. "It was a great learning experience."

Tavoso would have liked to finish higher than sixth at 132 pounds, Hayes said, but he wrestled with heart.

"Cody is a smart wrestler and he competed in a very tough weight class," Hayes said. "If you wrestled in that weight class next week, you might have different medalists. That's how the margin of error is at that level. He beat a really good kid from DeKalb in the quarterfinals to earn All State."

Both athletes were dedicated throughout the season, Hayes said, participating in early morning practices or wrestling after school to get more time on the mat.

"I'm very proud of them," Hayes said. "The amount of work these guys put in, I'm so happy they were able to get on the podium."