Revue returns at the perfect time

Musical pokes fun at all things Hinsdale to entertain and unite 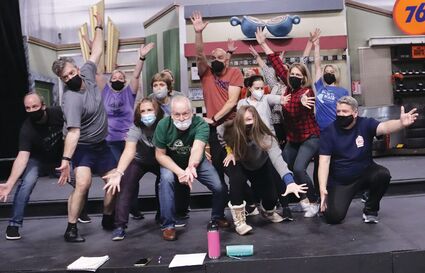 Mike Kinnavy rehearses a song for the Community Revue, "Hinsdale Unmasked," which opens a week from Friday at The Community House. He and other cast members are working with music director Gail Mangurten on several songs, including pop music and Broadway show tunes, whose lyrics have been rewritten to fit the show. Audience members will see their friends and neighbors dancing, too - and maybe even doing a little tap. (top left photo by Brooke Heilmann, other photos by Jim Slonoff)

When life deals a pandemic, you can be sure The Community House Players will tease the humor out of it.

The musical parody of the village's vagaries and hot-button local issues may be just the tonic people need after a crazy two years of hardship and polarization, according to producer and longtime cast member Susan O'Byrne.

"That's been my mantra from the beginning: One thing we need right now is a good laugh," she remarked. "Times have been divisive. Comedy can really bring people together."

Through song and dance, performers find the folly in the fraught times in a way that all can relate to, O'Byrne said.

"Your age, your politics, your stance on the school board or parking will not make any difference," she said. "We're all here to have a good time."

Dave Heilmann, who has directed the biannual Community Revue productions for more than 25 years, reflected on the 2020 edition "Hinsdopoly" that wrapped just as the COVID curtain was descending.

"It was really the last weekend of shows. They all started shutting down everywhere," Heilmann recounted.

It's good to be back, he said, but quipped that safety protocols this cycle has impaired his assessment of the cast's artistry.

"It's the first tine that we've rehearsed for two months in masks. I have no idea what they sound like," Heilmann said. "Singing and dancing in masks is not easy."

Rookie cast member Allison Peters said another challenge has been the constant script revisions to keep pace with the most recent developments.

"I think our community has so much turmoil going on right now, and this is my preferred form of therapy," said the seasoned musical theater actress. "The script does a good job at balancing both sides, and I think everyone can see themselves in the show and also see their neighbors."

Heilmann said the goal is give the audience a fresh and timely experience.

"This is the first show where the events are unfolding in real time, so that's really fun," he said. "The lines on the first night will not be the same on the second night or the third night.

"I think audiences appreciate that," Heilmann continued, then added with trademark irreverence, "If not, there's no refunds so I don't care."

"It's been great. I'm having a lot of fun," said Kinnavy, store manager at Hinsdale's Kramer Foods.

He commended the professionalism of the production, which has tempered his aversion to rehearse.

"I'm one that doesn't like rehearsals. I hate going," he said. "But when I get there everything is great and I have a good time and it just flies by."

"I'm embarrassed about doing it at home, so I do most of it in the car," he said, adding his family is very supportive of his involvement.

Peters said her children are too young to attend the show but they've been helping her prep.

"My girls are giving me dance pointers," she remarked.

O'Byrne said welcoming newcomers to the cast is rewarding, as is reconnecting with longtime cohorts.

"It really is great to get back with this gang," O'Byrne said. "The jokes start up again and the camaraderie is there."

She expects the joy in putting the show together will translate into an enjoyable night for audiences.

"Just hearing that there is a reaction out there is the best. That's why we do it," O'Byrne said. "It's a labor of love."

Heilmann said the labor over the past two months has been intense.

"They've just worked their hearts out," he said of the cast. "It's going to be a fantastic show. The theater, especially the humor side, is something that lifts and something we need, that break from reality."

He spoke wistfully of Community Revue legends Dick Johnson, BJ Chimenti and Ly Hotchkin, who all passed away since the 2020 show.

"We talk about them - what would they want us to do? They'd want us to get out there and make them laugh, make them smile," Heilmann said. 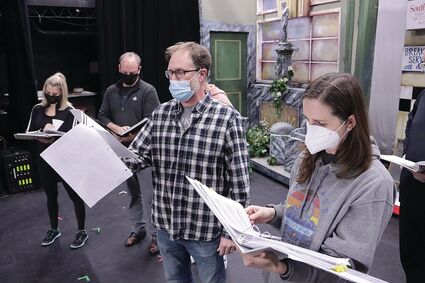 "When you can do this and benefit a cause like this, that's pretty worthwhile to everyone," Heilmann said.

It's not yet clear whether audience members will have to wear masks. O'Byrne warned people they'll be exposed one way or another.

"Our eyes are looking everywhere in town, so no one is safe," she said.

Tickets are $125 and include an open bar, hors d'oeuvres and dessert.