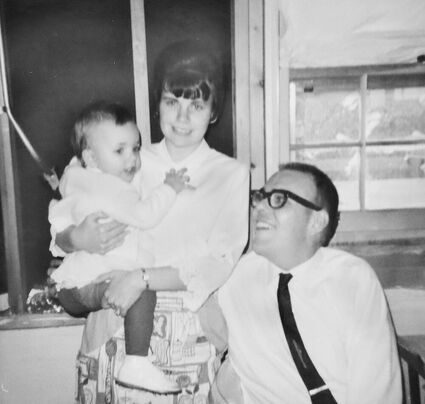 This photo is of my parents, Donna and Tom Lannom, and me at my first birthday party in the basement of our house in Homewood, where I grew up.

I've known I was adopted for as long as I can remember.

My birth mother loved me so much, my mom would tell me often, that she gave me up to make sure I would have a good home. And she and my dad had picked me to be their daughter. It was a story of love all the way around.

As I grew up, my understanding of being adopted deepened. I didn't want to find my birth mother, but I did think about her. I thought about her more after my own daughter was born. And yet I did nothing.

I think I thought if I went looking for my birth mom it was some sort of referendum on my life - that I didn't have good parents or a good childhood or somehow wasn't a complete person.

When Illinois changed its adoption laws in 2012, I took the first step and requested and received a copy of my original birth certificate. While I had known my birth mom's last name due to a clerical error during the adoption process, I never knew her full name. There it was. Patricia Jane Shelton of Berea, Ohio. Eerily similar to my own name: Pamela Jane.

It didn't take too many months for me to piece together what I believed to be basics of the story. She was in high school in Ohio when she got pregnant, and her parents must have sent her to live at Lake Bluff Children's Home - which was also a home for unwed moms-to-be. I found a Patricia Shelton Callahan on Facebook who graduated from the University of Illinois at about the right time, and I was pretty certain it was her. Friends told me to message her on Facebook.

"That is not the way to get in contact!" I protested - something I would chuckle about later.

I thought about writing her. But without knowing for certain that this was the woman who gave birth to me, I never did.

People are dying from COVID-19. My birth mom is 70, according to my birth certificate, and I have no idea what other health conditions she might have. I've got a 23andMe kit a friend gave me for Christmas a while back. But it's past the expiration date. I send in for a new one and decide to use Ancestry.com, too. I send in my samples. And I wait.

When my results come in, at the top of my list of relatives is a Chris Duffield, with about 28 percent shared DNA, listed as my niece. She's nine years younger than I am. I do a quick search to determine what percentage of DNA half-siblings share. Twenty-eight percent. Most likely she's my half-sister. I've waited this long, so I decide to wait for my Ancestry.com results before reaching out.

Fortunately Chris is not as patient. I get a message from her on a Friday afternoon.

"Hi, Pamela," she wrote. "According to 23andMe, we might be half sisters! Do you know anything about your family tree. I believe my dad had another baby when he was in high school but never knew what happened to him/her. I'm wondering if it's you!"

Over the course of dozen or so messages we determine that her father, Bob Short, and his high school girlfriend, Patty Shelton, are my birth parents. We agree to talk after work. That two-hour conversation leads to a four-hour meeting in Indiana Sunday afternoon halfway between here and her home in Cleveland. She's an only child, too. We talk about everything under the sun, including her father. Our father. I ask her if she thinks he will want to meet me.

And I'm OK with that. He likely closed this door more than 50 years ago and might not be willing to open it again. And so I wait again.

In the interim, I spend more time looking at Patricia Shelton Callahan on Facebook, convinced now that she is my birth mother. And then, on Oct. 5, I get a friend request from her and freak out. Did she somehow see I've been stalking her page? I accept.

A few minutes later, I get a Facebook message from a Robert C. Short.

"You have been talking to my daughter Chris," he wrote. "I just wanted to let you know my phone number in case you wanted to call."

He also let me know he has talked to Pat. Soon Pat sends a message, too, indicating she would like to talk as well.

And so it begins

We start off with phone calls and moved to FaceTime and Zoom. Talking to them, I learn the pieces of my story that I did not know. They started dating in ninth grade and were quite the couple - he played football and basketball and she was a cheerleader - when Pat's dad was transferred to Chicago for work. The family moved to Arlington Heights, and she began her sophomore year at Wheeling High School. Bob came to visit that following summer, and she learned she was pregnant that fall. She gave birth to me five days after she turned 17.

From what they tell me, I think there's a possibility they might have gotten married and raised me, had their parents supported that decision. Instead - even though Bob's mom had been forced to place a child for adoption before she was married - the families pushed for adoption and an end to the relationship.

Within a couple of months of first contact, we have plans to meet Bob in March and Pat in June at their homes in Florida and Maryland, respectively. I also have quite a collection of photos, including one Pat sent me of a note she wrote in her journal the day after our first phone call.

"I woke this morning with a feeling so intense and overpowering that it brought tears to my eyes. I stood still, wondering what it was. And then I knew - a mother's love."

She's a writer, too.

I was pretty calm in the weeks leading up to our spring break trip to see Bob and his second wife, Shari. After all, we had talked on the phone weekly for five months, had Zoomed several times and had exchanged Christmas and birthday gifts. How nerve-wracking would it be to meet in person?

When we arrived at his house after about an hour drive from the airport, the weight of what was about to happen finally hit me. I got out of our rented minivan and stood in the driveway. No one came out of the house. Time seemed to stand still, and I felt a wave of panic wash over me.

Our first meeting felt like something out of a dream or a movie. Everything felt a bit surreal for a couple of days - until we are diverted by our excursion to Harry Potter World at Universal Studios.

I remember sitting at our table on the patio of Hard Rock Café that night, watching the lights of shops and restaurants across the little lake brighten as the sun set.

"I am part of this family," I thought to myself. And smiled.

As Dan, Ainsley and I began our road trip to Maryland in June, I had a little better idea of what to expect. Nerves. Some sleepless nights. And an eventual settling in.

I was a little more composed when I first met Pat, and we all got along well with her and her husband Steve. She told me later that she has asked Steve what he thought of our interaction.

We had a great week, enjoying the charter fishing and beaches the Chesapeake Bay has to offer. We talked and cooked and took Percy, her golden retriever puppy, on walks. Before I knew it, it was time to leave.

Pat had decided ahead of time that it would be easier to say goodbye if we knew when we would see each other again. So I promised to visit over a long weekend in November.

I did, and I will see Bob and Pat and Chris - in the next few weeks when they come here to visit on different weekends in March.

Writing the next chapter

It's been 16 months or so since I first made contact with my birth family. We've all had the chance to spend more time together, and I'm finally starting to remember some of the family stories they've known their entire lives. We are settling into a rhythm and figuring out how these relationships are going to work.

I can't help thinking how strange it is the way the pieces of this family puzzle have come together. I am an only daughter to Pat, an only sister to Chris, an only niece to my Pat's sister Barb, an only cousin to Barb's daughter Erin. Ainsley is an only granddaughter on both sides, an only cousin to Erin's daughter Kalika. It seems hard to imagine now that we would not have all found one another.

An important element of this story must be noted. My mom passed away in November 2020, one day short of one month after I got the first Facebook messages from Pat and Bob.

Losing your only living parent (my dad died in 2002) is never easy, but the timing of her death was particularly difficult. COVID-19 rules at her assisted living facility interfered with regular PET scans and my ability to visit. I knew she was battling cancer, but I had no idea how quickly it would take her.

Among the early photos I received of my birth parents were these shots from high school - Bob's senior portrait and one of Pat from her high school yearbook.

And I didn't know quite how to manage the happiness I felt finding my birth relatives with the grief I felt losing her. So I wrote a column, because writing is the best way for me to process things, about endings and beginnings.

"I had hoped to find them at a time when my life was void of other big emotional events," I wrote of my birth family. "I've struggled to accept how everything has unfolded, with this juxtaposition of joy and sorrow."

A week later I posted the column on my Facebook page, and I am so grateful for all the people who wrote such lovely messages in response. One in particular really touched me: "Your birth mother gave your parents the gift of having you as their daughter and in some way the universe is returning you to your birth family."

My birth parents will never replace my mom and dad. But meeting them and my sister certainly has opened a new chapter in my life.

I can't wait to see how the story unfolds.