Local man of faith steps up to the pastoral plate 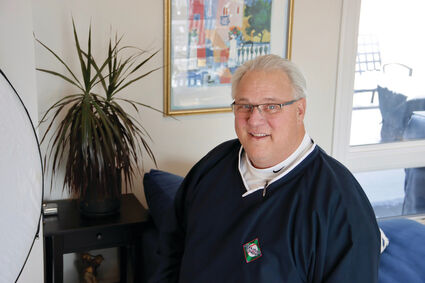 Paul Jepsen answered a lot of calls during his decades with the Oak Park Police Department.

Now the retired sergeant is responding to a different calling that connects him with prospects instead of suspects. Jepsen serves as team chaplain for the Chicago Dogs, a four-year-old independent professional baseball franchise in Rosemont.

"I'm a layperson, I'm not an ordained minister," he's quick to point out.

That didn't stop Dogs' manager Butch Hobson last year from approaching Jepsen when the position opened up. He knew Hobson from the seasons Jepsen's son-in-law was on the Dogs' roster, and Jepsen had been open about his deep Christian faith.

"He said, 'You would fit right in with those guys,' " Jepsen related. "So I did it, and it's been very, very rewarding."

Team chaplains join Baseball Chapel, an organization that provides training and a schedule of Bible readings for Sunday services.

"I do both home and visiting teams, the umpires, the front office, and, as soon we close the gates at 3 o'clock to start the game, I do the grounds crew, too," Jepsen said. "So five communion services every home Sunday."

Services on game day are an efficient 15 minutes. In his debut, Jepsen had misread the speaking plan and tried to swing for the fences. In his weekly Baseball Chapel report, he submitted a plea for help.

"I said, 'How are you supposed to get through a whole chapter of Romans in 15 minutes?' " Jepsen recounted. "My coordinator goes, 'Paul, you don't do the whole chapter, just the first four or five verses.' "

Initially envisioning a career as an insurance agent like his father, he turned to public safety, getting top marks on the police exam. His spiritual journey has evolved as well. A humanitarian mission trip to an impoverished region of Haiti two years ago revealed to him the meaning of living by faith in profound way.

"They have nothing," he said. "They have no cooking, no bathrooms. They wash their clothes in filthy river water. And yet they're so thankful for what they have."

Attendance at the Sunday sessions has been encouraging, Jepsen reported.

"Between the coaches and the players, I have anywhere between 19 to 23 every week," he said, noting he also emails out Scripture commentaries during the offseason. "I just want to keep them involved, give them five, six minutes of something to read."

His goal of igniting one person's faith during the season was realized within the first couple of months. A young man was moved to buy his first Bible and share his daily devotions with Jepsen.

A main mission now is finding host families for Dogs' players from early May until Labor Day, a little longer with playoffs. Interested residents can call Trish Zuro at (708) 203-5000.

"It's a rewarding experience," he said.