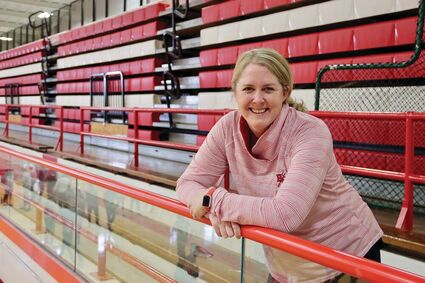 Kelly Watson has loved her job as assistant athletic director at Hinsdale Central almost as much as she loves teaching adaptive PE and coaching the Special Olympics basketball team. Her passion for her job - and the school - garnered her the Assistant AD of the Year award from the Illinois Athletic Directors Association. (Jim Slonoff photo/file photo)

In nominating Watson to the Illinois Athletic Directors Association, Central athletic director Dan Jones described her as the most humble and hardworking person he has known in his 33-year career in education.

"She knows how to interact with people to get the best out of them," he wrote. "The coaches and parents that work with her think highly of her. She is responsible and very persistent when it comes to her work. She is a talented, very organized and disciplined person."

Central Principal Bill Walsh said he couldn't be more excited for Watson. Nor could he resist giving her a little dig about her alma mater.

"Kelly is just an outstanding assistant athletic director," he said. "Her love for Hinsdale Central - even though she's an LT (former) student - has been extraordinary."

Watson, who grew up in Western Springs and played volleyball and basketball at LT, said she was excited to get the news.

"Obviously the recognition is awesome," she said.

She and her family will attend the association's annual conference at the end of April, where she will receive her award.

"That will be great to see all the ADs from the state," she said. "Paul and the kids are going with me. It will be a nice little weekend in Peoria."

Watson, the daughter of a banker dad and a teacher turned stay-at-home mom, began her career at Bank One (now Chase) after graduating from Miami University.

"I just kind of followed with Dad, but always had it in the back of my mind I wanted to work in education," she said.

After working for a few years in banking, she decided to follow her heart. She went back to school to earn her master's in teaching from Concordia University, and at the same time began her relationship with Hinsdale Central.

"I actually coached here when I was in grad school, so I kind of got the vibe of a high school, and so the transition was pretty seamless," she said. "I student taught here also.

"The stars were aligned," she added. "There was a job opening and I was able to get hired here and the rest is history."

Working as assistant AD for the past 12 years has given Watson the chance to put the business part of her brain to use. She said she has no aspirations of rising to the AD position.

"I like that administrative aspect, but the reason I got into education was to be in the classroom. I wanted to have that (assistant AD) position because I knew it kept me in athletics and involved. I obviously love all sports."

An assistant AD has many responsibilities, but the main one was affected dramatically by the COVID-19 pandemic.

"A lot of what I do has to do with the schedule, which, as you can imagine, over the last two years has been challenging," she said. "I'm so happy the kids were able to play last year and the fall."

She also helps supervise events, secures individuals to work the games and help athletic director Dan Jones with whatever he needs. Watson said she was more than willing to step up while Jones was on a six-week leave in the fall for family reasons, taking on extra work and helping interim AD Andy Turner get up to speed.

"I was happy to do it, obviously, so he could be with his family," she said.

Jones devoted significant space in his recommendation letter to laud Watson's efforts during his leave.

"I can never repay her for what she has done. But what I can do is make sure she is recognized for what she means to HCHS by this nomination," he wrote.

While Watson enjoys her administrative duties, her real love, as she suggested earlier, is in the classroom. Her favorite part of the day is teaching adaptive PE and then having the chance to deepen relationships with her students as coach of the Special Olympics basketball team.

"It's just so great to coach these kids that I get to work with during the day," she said. "It is heartwarming and so amazing to have the support of their families."

The most challenging part of her job, she said, is balancing work responsibilities with her home life. She and husband Paul have a son Jack, 9, and a daughter Riley, 8.

"My kids are both athletic and love playing all types of sports," she said. "Dan and I work well together in being able to make those adjustments so I can be at their games."

Having husband Paul stay home with the kids gives her the flexibility to be where she needs to be, whether it's a football game in the fall or a tennis match in the spring (she coaches JV girls tennis). Having kids who love sports and want to come watch games at Central makes things a little easier.

"It's good for them to see me working and my relationship with the students and my passion for what I do here," she said.

Spring is the busiest season, both in terms of Central athletics and her family's sports schedules. It also can be the most difficult to navigate, with snow or rain interrupting outdoor contests and tweaking Watson's Type A personality.

"The weather puts a damper on that part of me," she said. 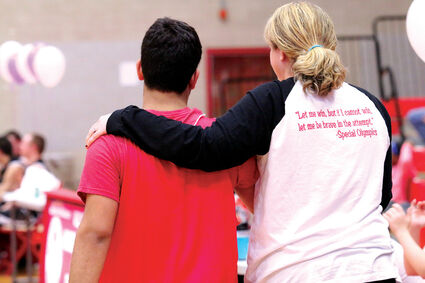 Watson believes the growth in opportunities for female high school athletes has been reflected in coaching and administrative jobs as well.

"I would love to see more female athletic directors, obviously, in the state of Illinois, but we have some great ones in our conference," she said.

"I have written numerous letters of recommendations before in my career," he wrote. "But this one is the most important one I have written. Please recognize Kelly for what she is and has always been - the best assistant anyone could ever hope for - and name her the Assistant AD of the Year."

Hard to compete with that.