McGue finds more than she searched for 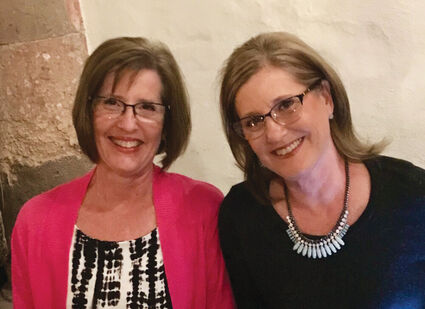 Julie McGue (right, above) and her twin sister, Jenny, were adopted by Jeanne and John Ryan from Catholic Charities when they were infants. Julie's search for her birth relatives was a five-year journey with its share of detours, disappointments and joys. (photo provided)

A disconcerting mammogram reading prompted Julie McGue to search for her birth family, with the hopes of learning her medical history.

The five-year search process generated much more than information about her genetic predispositions. McGue found and established a relationship with her birth mother and other relatives, chronicling the experience in her memoir, "Twice a Daughter: A Search for Identity, Family and Belonging."

"From the very get-go I was journaling about what I was going through," said McGue, a longtime Hinsdale resident before a 2016 move. "My mother-in-law taught reminiscence writing at a senior center. As the story was going up and down and up and down like a roller coaster, she said, 'You have to write down snatches of dialogue and where you were when things happened.' She really was my writing coach.

"Unfortunately she died before the book was published, but her influence is in every page," McGue added.

The 268-page memoir documents McGue's quest to find the woman who gave birth to her and her identical twin, Jenny. The two were adopted together as infants. Although McGue took the lead on the search, having her sister involved was a great benefit.

"Things that I wasn't quite thinking clearly about, she was, and just having her there to go through that process and feel the exact same emotions I was feeling put so much validation into all the steps," McGue said. "I think being able to talk about it with somebody really helped more than anything."

McGue also took comfort in attending a Catholic Charities adoption support group, especially during some of the more difficult moments of the search, like her birth mother's initial resistance to meeting her and Jenny.

"I needed coaching on how to get through that. That was a vital step," McGue said.

Recounting that initial rejection was the most difficult part of writing the memoir, she related.

"That chapter was really flat and I had to go back to it many, many times with my editor and add detail and take things out," McGue said.

The distressing news came at the same time her daughter's close friend was undergoing major surgery and six inches of heavy, wet snow had blanketed Hinsdale.

"Trying to balance all of what was happening that day was really, really hard to write about," she said.

The chapter, titled "Denial of Contact," contains some very candid admissions of what McGue was feeling.

"My birth mom's rejection embarrasses me. Shames me. I feel childlike. Unworthy. Less than," she writes.

A breakthrough came several months later when McGue and her sister spoke by phone with their birth mother and eventually set up their first meeting. Learning her family history filled a hole McGue had lived with her entire life.

"Pride fills me up - I finally have a pedigree like almost everyone I know," she writes.

The early stages of the relationship were not without their challenges, and McGue's adoptive mom struggled when she learned about the connection. McGue's subsequent overture to her birth father did not result in a meeting, however, despite encouragement from his son, McGue's half-brother. She said it would have been meaningful to at least see her birth father, who has since passed away.

"It's nice to connect those dots, but I don't feel terribly cheated that I didn't meet him," she said.

More than two years have passed since McGue last saw her 89-year-old birth mother, primarily due to COVID-19. But the two talk regularly.

"She doesn't have any other children besides my sister and I, and I think not having raised any other children, it's awkward for her," she continued. "I think she is trying to figure out how to be a mother when for so many years she told basically anyone she knew she was not a mother. She's had a lot of identity issues, too."

Talking to birth mothers and adoptive parents in her support group helped McGue better comprehend how complicated the situation is for everyone involved and ultimately affected the tone of her memoir.

"I think that understanding allowed me to soften the sharp edges of my experience and see it from a different viewpoint," she said. 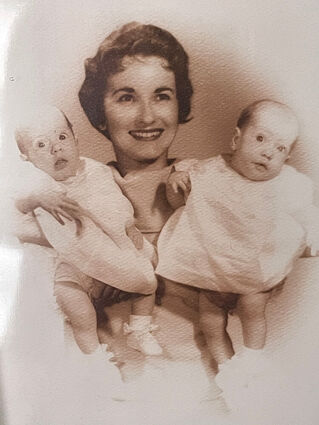 McGue gave her birth mother and adoptive mother each a copy of the manuscript before the memoir went to press.

"I was really nervous about that," she said. "It worked out. Both of them said they were very pleased with how it worked."

She said she hopes sharing her story will help other adoptees who are searching for their birth families.

"I think more and more people are going down this road and we're talking about it," McGue said. "That is the benefit of writing the book, to tell people, 'I'm not alone in what I'm thinking and what I might find.' It sustains people."

Were it not for her husband Steve's insistence, McGue said she's not sure she would have connected with her birth mother and half-brother.

"I'm forever grateful for that decision."