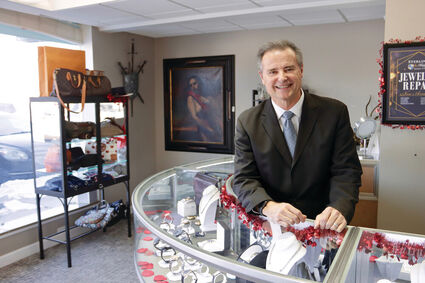 J. Ford Sunderland HINSDALE RESIDENT SINCE 2006 • ON The Illinois Pawnbrokers ASSOCIATION BoaRD • FATHER OF TWO DAUGHTERS and TWO SONs ages 28 to 18 • MARRIED TO WEIHUA • Native of FLOSSMOOR

As an enterprising undergrad at Arizona State University, J. Ford Sunderland was a quick study recognizing he could leverage his background working in his father's jewelry business to help cash-strapped co-eds obtain funds.

"I would buy from students that needed money for the weekend," Sunderland related. "And I also sold jewelry to sororities and at flea markets during the Christmas season."

Today, the Hinsdale resident operates the Sterling & Knight Jewelry and Pawn store chain across the western suburbs, including in the village along Ogden Avenue. Sunderland also currently serves as chair of the Hinsdale Chamber of Commerce board. He credits the organization with being an important source of support, particularly during the last two years.

"The chamber was really helpful to me as far as navigating through COVID, just seeing what other retailers were doing, bouncing ideas off each other," he said.

Sunderland is involved in the chamber's Heroes networking group, which hosts training programs and also serves as an accountability group for its members.

"I've really enjoyed getting to know people in the business community. I think that's really the strength of the chamber, connecting different business owners," he said.

Sunderland endeavors to promote chamber engagement during his leadership term.

"I hope our focus for this year will be to try to get more participation from the members," he said. "That's always the challenge, especially as a business owner, to make time for all the different events."

He said Sterling & Knight traffic has kept him busy, especially during the pandemic.

"With all the government stimulus money and also people not vacationing or going out to dinner, people had a lot of disposable income," he said. "Our sales went off the charts."

Sunderland gained valuable experience alongside his dad and siblings.

"I've been in the jewelry business for my whole career," Sunderland said. "I was the first one to go into the business with my father, and then my two brothers and sister all ended up joining."

Eventually setting off on his own, he opened his first pawn shop in Villa Park in 2010 and expanded to Hinsdale in 2011. Sunderland now has five branches across the western suburbs with a vision for 10 by 2025.

"Our business is really good in up economies and down," Sunderland explained. "When things were down, a lot of people were selling things and liquidating assets.

In addition to buying and selling merchandise, customers can also take out loans.

"Our goal is to give our customers hope for tomorrow by helping them meet their financial needs today," Sunderland said.

Some of his stores even have mini food depositories.

"We call them 'Blessing Boxes,' " he remarked. "People actually leave food, and people take it,"

His four children are spread across the country, in college or pursuing careers. Opportunities to reunite are special.

"It's hard to get together these days, but we do it," Sunderland said, joking that none of his kids has expressed interest in taking over his business.

He's active in Highpoint Church, which rents space at The Community House.

"We've been meeting for probably not even six months," Sunderland said.

As far as the next six months and beyond, he's wishing for a return to normalcy for all.

"I'm hoping the pandemic calls it quits," he said.