As Lewis learns more about his background, his birth father is relieved to know son is OK 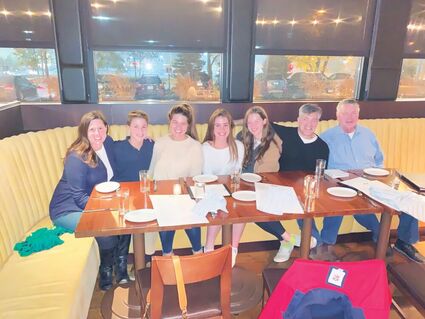 Bill Lewis had his first meeting with his birth father, Phil (far right), at a nearby restaurant in 2019. His wife Kristen (from left), son Josh and daughters Mary Claire, Sofia and Emily were there as well, Lewis said.

Were it not for his daughter, Bill Lewis might never have found his birth family.

Four years ago, when she was a senior in high school, Mary Claire came to her father with a simple request. Well, more of a demand.

"She is a triple Type A and tells me she wants me to do one of those DNA things so she can find out if I'm a minority," Lewis, a Hinsdale resident, said.

Her goal? To get into a better college.

After initially refusing, Lewis eventually agrees and submits a sample to Ancestry.com. Two months later, he receives a message from someone claiming to be his cousin.

"I just ignored it," Lewis said. "I'm like, there's no good that can come from this."

Like many adoptees, Lewis worries about interrupting the life of a birth parent who might be married to someone who has no knowledge of his existence. He also feels like he has had wonderful parents and his life has been complete.

But he's also interested in obtaining the medical history most adoptees his age lack. So he submits another sample to 23andMe to obtain medical data.

Again he hears from his cousin, who offers more specifics this time. He tells Lewis his birth father is one of his uncles and that Lewis will be hearing from him.

"I ignore that as well," Lewis said. "I'm still trying to process this. Literally a day later I get an email: 'I am your father. Please call me.' "

Lewis responds that he will do so after he returns from a business trip to China. Before he makes the call, he does some research online to make sure this isn't a scam.

"I get paid to assume everyone is lying to me," the attorney said.

But he is reassured by a photo he finds of his birth father.

"It was scary how much he kinda looked like me." Lewis remarked.

When he finally makes the call, he hears the story of his birth parents' relationship. They had been dating for a while when she got pregnant, but both knew the relationship was not going to work in the long run. His birth father was notified when the baby was born, and two days later he married his current wife and the two had a son and a daughter.

His birth father also shares his desire to meet, and the two agree on a visit. Lewis, his wife and four children meet him for dinner at Michael Jordan's steak house in Oak Brook.

"I didn't want to be alone, and he wanted to meet them," he said.

Lewis said he spent most of the dinner simply noticing what was going on.

Later, when Lewis is in Texas for a convention, he drives to Houston to meet his entire birth family.

"I was expecting the inquisition and it really wasn't like that," he said. "It was not all about me, which I was really thankful for, for once."

He and his birth father have not had a lot of interaction since that meeting, Lewis said. The two will talk on the phone on birthdays or Father's Day and send cards. Lewis believes his birth father needed to make sure Lewis' life was not ruined by being given up for adoption.

"Whether or not I'm the son he would have wanted, I don't know. But I think he knows I'm OK," Lewis said. "I think that's what he really wanted."

Lewis learned from his birth father and an aunt familiar with his adoption that his birth mother was in a bad car crash about a month after he was born and might not have survived. Lewis wonders if he would have been in the car with her if she had kept him.

"My life has been blessed twice, if you will," he said. "I have a reason for being here and but for this adoption I might not." 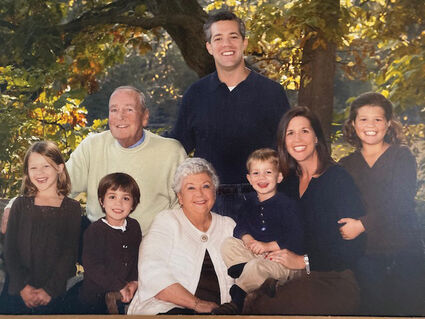 This family portrait of Bill's family with his adoptive parents, Joanne and Ed Lewis, was taken when his kids were younger. (photos provided)

Lewis said he will probably never know what happened to her. Several years back, when Illinois changed its law regarding adoption records, he did send in a form to request his original birth certificate. When he called to follow up, he was told his request had never been received.

"I do feel I owe her an immense amount of gratitude," he added.

Lewis said he learned he was adopted when he was in first grade. He went to school and told everyone, only to be mocked by one of his classmates. He recalls his comeback clearly.

" 'My parents chose me. Yours were stuck with you.' That shut him up so fast. It was perfect," Lewis said.

His adoptive parents are both gone now. But he still remembers how his mom responded when, as a young child, he would get upset about being adopted.

"She said, 'No. That meant we chose you, we wanted you, we love you and we're so happy that you are our son,' " he said, choking up. "At the time it didn't make me emotional like it does now."