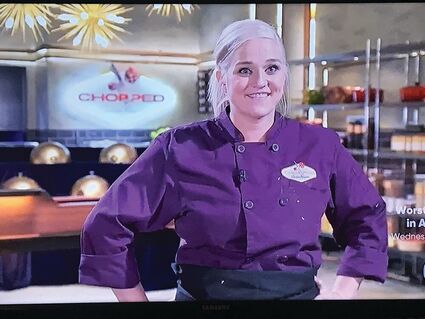 The pressure was on in the second round of "Chopped Casino Royale: Finale."

Chef Grace Goudie, a Hinsdale native, had incorporated two of her basket ingredients into a spaetzle. But she couldn't get it to pass through the colander in order to cook it.

"The judges are yelling at me to plate," she says on the episode. "This spaetzle isn't turning out the way that I cook spaetzle. I have to get something on the plate. The adrenaline is insane."

She eventually does get the spaetzle in the pan and on the plate, alongside lamb schnitzel and a fuzzy squash salad. Judges Amanda Freitag, Tiffani Faison and Christian Petroni enjoyed the schnitzel and the salad but said the spaetzle didn't have enough of the cheese or mushroom flavor, and the dish needed brown butter all around. Goudie was chopped - but not before beating three other chefs to become a Chopped champion in Battle 2 and one other chef in the finale.

"I tried probably 10 different things," Goudie told The Hinsdalean Wednesday morning of her struggles with the spaetzle, including a strainer, piping bag and box grater.

"I tell my team this all the time," she said. "You have to roll with the punches and be adaptable in a kitchen. Things go wrong all day every day.

"I was trying to do what I teach my team to do - figure it out with what you are given," she added.

Goudie, a graduate of the Culinary Institute of America in Napa, Calif., worked in restaurants in California - including the three Michelin-starred French Laundry, before opening Scratchboard Kitchen in Arlington Heights in April 2020. She launched her online brand, gracegoudie.com, in June of that year. Her video-based content caught the eye of the Chopped casting team, and they reached out to her in June 2021.

"It was kind of a bunch of dominoes falling together," she said. "I happened to be in the right place at the right time."

With a background in journalism from her undergraduate studies (and exposure through parents Chuck and Teri Goudie of Hinsdale), Goudie said TV is something she's always been interested in.

"I thought it would be a cool experience as my first national TV spot," she added.

And yet she knew there was a chance she could be eliminated early in the three-round competition. Chopped chefs must cook an appetizer, entree and dessert using often unusual ingredients from a basket they are given moments before they must start cooking.

"I didn't know how I would react during the competition with all the pressure. I just kind of went into it with an open mind. My goal was to get past the first round in the first episode."

And she did, winning all three rounds (see sidebar for basket ingredients and dishes) to become a Chopped champion.

When asked if she was competing for anyone, she pointed to her mom, whom she described as a "bad-a** fierce person" in the finale.

Teri Goudie said Grace, the youngest of five, set out to carve her own path and has done so with creativity, hard work and grit. She enjoyed watching her daughter compete - especially during the dessert round of Battle 2. It reminded her of the time she and Chuck would carve out to read each kid a bedtime book.

"Grace loved the book 'Thundercake,' and my heart soared when that turned out to be her winning dish as Chopped champion," Teri said. "My advice to young parents is to have faith. Every little moment, even reading a book, is a stepping stone to a beautiful life for your child."

Goudie said she's been anxious for the episodes - which she spent a week filming in October - to air, especially with so many people at her restaurant asking how she did.

"Obviously you have to use your poker face and not give away the result," she said.

With COVID-19 cases rising, she decided not to have a watch party for either episode. The first aired on Jan. 11.

"Right now with how the restaurant industry is going and the extreme struggle that all the restaurants are having with COVID, I don't find it responsible to be in a big group, especially when I go to my restaurant every day," she said.

Goudie said she thought it was "super rad" that all the chefs who made it to the finale are female. Being a woman in the industry is not easy, she said, especially if you are 5' 4" with bright blond hair and no tattoos. 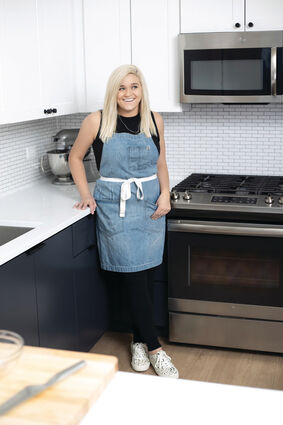 "I've had a lot of struggles in my career through the way I'm treated and the way I'm looked at," Goudie said. "I don't look like your typical female chef."

And yet she was able to hold her own with more experienced chefs, a fact that makes her proud.

"I think if anything I got out of this competition is a boost of confidence," she said. "I can hang with the best and hold my own with the best even if people have 8, 10 years of experience on me."

Goudie, who describes herself as a perfectionist, told Tuesday night's audience she was disappointed after being chopped. But not discouraged.

Chef Grace Goudie prepared the following five dishes when she competed in the Chopped Casino Royale tournament, the finale of which aired Tuesday on Food Network.

Roll: a four allowed her to trade vegan lobster for mushroom ravioli

Her dish: lamb schnitzel with spaetzle and fuzzy squash salad

Roll: even, earning her wagyu ribeyes for cod milt

Roll: even, earning her pear brandy for bottarga