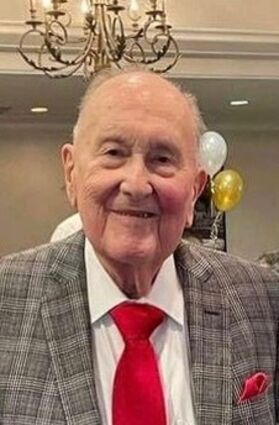 He was born in 1931 in Chicago to the Wence F. and Leonie (nee Stranen) Cerne.

Wence lived a very successful life that was highlighted by his strong commitment to his community and his family. He was raised in the Gage Park neighborhood of Chicago, where he graduated from Gage Park High School. He then worked his way through Woodrow Wilson Community College, Emory University and Northwestern University School of Law, where he was on the Law Review.

Upon graduation and being penniless, he took a job as a trial lawyer at the Illinois Central Railroad. With limited means, Alice and Wence embarked on their life journey.

A career at the Illinois Central Railroad was a great fit for Wence, as he was an avid railroad enthusiast, a lifelong passion he shared with his brother, Richard. As Illinois Central Railroad became part of IC Industries (later Whitman Corp., a Fortune 100 company), Wence moved through various positions ending in the real estate division and becoming a senior vice president of real estate and an officer of the company. Wence oversaw the development of Illinois Center in Chicago, which included the Standard Oil Building, now Aon Center, as well as the Hyatt Regency hotel. An important feature of that development was his successful legal fight to recognize the principle of property air rights in Illinois.

Wence was also involved in his community. He was elected police magistrate of Downers Grove, and in Oak Brook he served as village trustee for four years and as village president for 12 years. Wence was also a big supporter of Boy Scouts of America, serving as president of the DuPage Area Council, later Three Rivers Council, and was a recipient of the Silver Beaver Award for his commitment, service and dedication. Wence was also a long time member of the United Methodist Church of Downers Grove and Christ Church of Oak Brook.

While Wence achieved success, he is best remembered for his most desired goal of being a committed and loving husband, father and grandfather. Nothing was more important to him than having a devoted and close-knit family. He was by Alice's side daily while she struggled through two bouts of breast cancer. He never lost faith in his children and was always their biggest supporter. A dedicated grandfather, he was always involved in the lives of his grandchildren helping them whenever he could. He was likewise devoted to family in his marriage to Rita, and she certainly brought joy and happiness to him and his family. The strong family he developed was evident as they were all with him throughout his life, providing continuous love and support.

He is survived by his wife, Rita Labedz Cerne; his children, Neal (Beth) Cerne, Laura (Rory) Hanley and Wayne (Heather) Cerne; and his grandchildren, John, Brooke and Kristen Cerne, Matthew and Alison Hanley, and William, Nathan and Andrew Cerne.

He was preceded in his death by his first wife, Alice Cerne, nee Rueckert; and his brothers, Richard and Robert.

In lieu of flowers, memorials made be made online to the Boy Scouts of America at https://www.scouting.org.