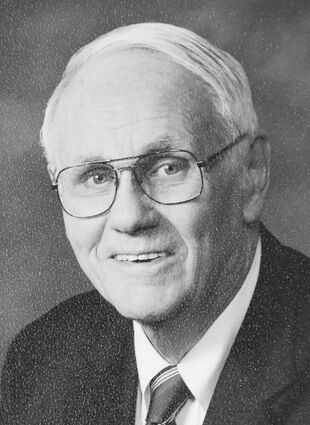 His final 14 years were spent with Joan Woehrmann by his side.

He was born in 1930 in Clinton, Iowa, to Olivia C. and Detlef C. Carstensen. He grew up in Clinton and proudly attended the University of Iowa, where he met and married Joanne L. Thompson of Davenport.

After graduating in 1952, he returned to Iowa to help his widowed mother run the family business, Carstensen Freight Lines, which operated from 1938 to 1994. David was involved in the community, serving on the board of directors of Clinton National Bank and active in the town's development. He also was a member of the Rotary and the Clinton Country Club. Eventually his leadership at Carstensen Freight Lines brought him and his wife to Chicago, where they lived in Hinsdale for more than 40 years.

Dave was a devoted husband, father, grandfather, great-grandfather and friend. Always the gentleman, he made friends easily and valued those friendships. Above all else, he cherished being on a field or in a gym cheering on his grandchildren. He was enthusiastic about any activity that allowed him the chance to spend time with them and offer his sideline coaching tips.

He is survived by his partner, Joan Woehrmann; his son, David Jr. (Beau) Carstensen of Hinsdale; his daughter, Kimberly (Stacy) Martin-Carstensen; his grandchildren, Zachary (Maya), Caroline, Meredith (Mac) and Jessica; his great-grandchildren, Kane, Crosby, Ryne, Giada and Angelo; and his brothers, Jack (Pat), Richard and Jim (Kay) Carstensen; and many nieces and nephews.

He was preceded in death by his wife, Joanne; his son, Detlef; his daughter, Julie; his sister, Judith (Carstensen) Gorman; and his sister-in-law, Annette Carstensen.

The memorial and burial will be held at a later date in Clinton.