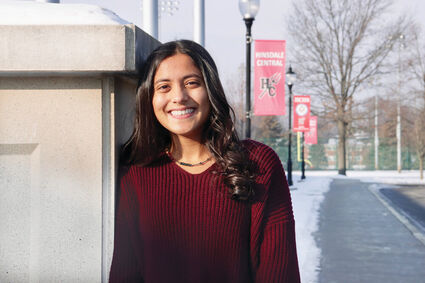 Jui Khankari Has played flute since fifth grade • Speaks three languages • Taylor Swift fan • Once rode a wave with a sea turtle while surfing • Has a pet turtle, Archie, who does not surf • Founder of AInspire, a nonprofit that encourages the study of AI all over the world

Jui Khankari was used to people mispronouncing her name. But when her mother's phone followed suit, she decided to do something about it.

After just a few tweaks, Khankari had taught Siri the correct pronunciation of her name, and Siri had introduced Khankari to the world of artificial intelligence.

"It will be my first time in New York," said Khankari, a senior at Hinsdale Central High School whose research also has been accepted by the Journal of Neurointerventional Surgery.

While managing a full load of advanced placement classes, Khankari continues to conduct research under the guidance of Dr. Greg Zaharchuk, associate professor of radiology at Stanford University. Khankari was 15 years old when she approached Zaharchuk with the idea of an internship. After months of study and preparation, she began working with Zaharchuk in spring 2020.

"I do it every free minute I have," said Khankari, who said she's been known to wake up in the middle of the night with an idea or realization that needs to be recorded right away.

Using hundreds of brain scans obtained through her work at Stanford, Khankari set out to create an algorithm to accurately locate vessel blockages and anatomical features that could speed up diagnosis and treatment of ischemic stroke. AI algorithms are used to read other types of scans, Khankari said, but not the type used to diagnose and treat large-scale strokes.

After testing two types of AI algorithms, Khankari said her research proved that strokes and anatomical features can be detected using AI. It's a realization that could save lives.

"Two million neurons die every minute that a stroke is left untreated. By reducing treatment times even by a single minute, this algorithm could reduce death and disability in stroke patients worldwide," Khankari said.

"I'd love to be on either coast," she said, but no matter where she goes, Khankari's goal is to become both a researcher and a physician, treating patients one-on-one while also creating algorithms to advance health care for everyone.

"I get super excited about what I'm doing," she said, whether that's taking a hike, studying for an exam, or creating a potentially life-saving algorithm.

Finding time for school, research and her many hobbies isn't hard, Khankari said, because she loves doing it all.