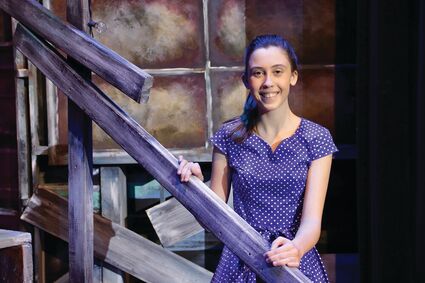 In 2019, Sarah Prisby had a small part in Stage Door Fine Arts' production of "Newsies." The experience left a big impression.

"Even though it was just a tiny little role, everyone worked together as hard as possible. It was fantastic," the Hinsdale teen said.

Prisby continued to put in her own work, and now, three years later, has a considerably larger role in Stage Door's "All Shook Up" the next two weekends at The Community House (see Page 34 for details).

Inspired by Shakespeare's "Twelfth Night," the musical is set in a small conservative Midwestern town that is rocked by the arrival of Chad, a handsome rebel astride a motorcycle and toting a guitar. His blue suede shoes are a nod to the show's soundtrack of Elvis hits, which help open villagers' hearts and minds.

Prisby plays Lorraine, the daughter of the local honky-tonk owner and a romantic. She said it's a part she's been able to sink her teeth into.

"Lorraine's a really fun character to play because she has a lot of personality," Prisby related. "She's a little bit goofy, a little bit all over the place. But I kind of like those types of characters because you can really get a lot of animation from it."

"I got to do a lot of partner work with my friend," she said, "It was just a really fun experience to have that kind of moment when it's just you and your partner on stage."

Prisby has accumulated a lot of friends since joining Stage Door in 2014, making her debut in "Peter Pan." She's performed in more than 16 productions since then, earning "hall of fame" status in the troupe as she's grown up with many of her castmates.

"We've kind of formed a little family over the years," Prisby said. "We all put in our work together. If anyone is struggling, we help. It's in our best interest to help one another."

Learning lines and choreography for one role is a tall order. Because Stage Door shows are double cast, members have to learn two separate sets of stage directions, Prisby noted, expecting the multi-tasking experience will serve her well down the road.

Tech week right before the show opens is crazy, she said, but also the chance to see long hours of labor materialize into audience-ready theater.

"It's always the hardest because you have all the lighting and all the blocking that goes into it," Prisby added. "You have everything put together into one, and then it's show time.

"It's one of the most stressful weeks, but it's all a lot of fun," she added.

Pre-performance butterflies are just a sign that you want to do your best.

"You have that nervousness at first, but when the spotlight hits you, it all goes away," Prisby said.

Getting positive feedback from family and friends is always rewarding.

Prisby said audience members - whether Elvis fans or not - will find a lot to enjoy about "All Shook Up."

"It's really fun, it's really outgoing," she said.