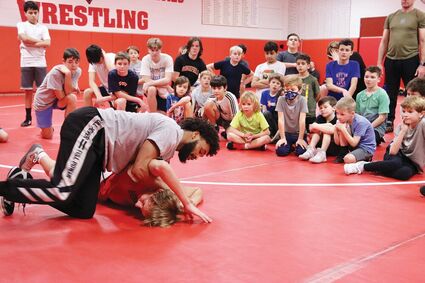 Former Hinsdale Central wrestler Tim Quirk works with his first-grade son during the Hinsdale Red Devil Wrestling Club practice Tuesday at the high school. Juwan Edmond, a 2016 Central alum and standout wrestler, demonstrates a move for club kids, many of whom hope to join the Red Devils' roster one day. (Jim Slonoff photos)

Hinsdale fifth-grader Jake Knapp had heard about the rigors and rewards of wrestling from a couple of family friends who compete at the Division I collegiate level.

"I just kind of wanted to try it and get to know the sport," Jake said,

He didn't need to go far, joining the Hinsdale Red Devils Wrestling Club three years ago and continuing this year. The instructional program for kids in second through eighth grades runs November through February, with twice-weekly practices in the Hinsdale Central wrestling room.

Dad Chris Knapp said Jake and his older brother, Bo, are in the club.

"They really love it," he said, noting both also play football. "You're engaging with somebody (on the other side) and it's technical, and it builds your strength."

Brian Bazan helps lead the club and said most of the 70 or so kids are getting their first taste of wrestling.

"The majority of them are beginners," he said. "A lot them had heard of wrestling, but until they get on the mat they don't really know what it's about."

Through a positive approach, the coaches - all well experienced wrestlers including members of Central's program ­- impart both the technique and tenacity required to excel, according to Bazan.

"As they learn moves and all the things that go with it, they learn to overcome adversity," he said. "They're the only one on the mat against the opponent, there's no one coming to help them, so they develop the self-reliance for them to be successful."

This training for grade school grapplers has been around in various forms in the community for decades. Tim Quirk, a 2002 Central grad and Red Devil wrestler, remembers being in a previous iteration of the club. Now his son Will is following in his footsteps.

"Will loves it, and mostly because his friends are doing it," Quirk said.

Sean Parker, who runs the club with Bazan, said his son's involvement in the club for the last few years has borne fruit.

"There was a tangible improvement in his confidence and his sense of resilience mentally and physically," Parker said. "I've seen firsthand what an impact it can have."

He acknowledged that some parents are apprehensive about signing up their child for such a physical sport.

"After they've seen a couple of practices, all of it feels extremely positive," Parker said. "They're excited to see their kids being out and active, and learning moves and how to string moves together."

In the wake of last year's canceled club due to COVID, Bazan and Parker weren't sure what to expect.

"We were surprised. We started getting tons of responses. Now we've got a pretty decent turnout for practices," Bazan said.

Members participate in meets every other week or so. Two weekends ago the club brought 18 wrestlers to a competition at Marist High School.

"Ten of them finished first. They all stepped up and acquitted themselves well," Parker reported, underscoring the development it reflected. "You're putting the kid in front of another kid who they've never seen before. There's a certain amount of mental resilience that's required to go into that."

Central varsity wrestling head coach Jason Hayes and assistant coach Richard Pauliukonis, a two-time Olympian, run the practices, enlisting the help of varsity and JV wrestlers. Hayes said the instruction is patient but consistent - and not a grind.

"You've got to have a little fun with them. You've got to push them and try to expose them to new things," he commented.

Hayes referenced his own late introduction to the sport in high school and how he would have benefited from such a youth club.

"I tell then, 'You guys are miles ahead of where I was. But you've got to stick with it'," he said.

He cited the key role the club has played as a pipeline for Central wrestling.

"Over half of our starting lineup would have been club kids (but for a few injuries)," Hayes stated.

"I think it's one of the harder sports but it pays dividends," he said. "It's kind of fun to have the family ties there."

With minimal equipment needed and kids of all sizes welcome thanks to different weight classes. Parker touted wrestling's accessibility.

"Almost any kid that's willing to put in the work can develop a certain acumen and technique that will make them a competitive wrestler," he said.

Quirk said kids are rewarded by their perseverance in the form of good results. 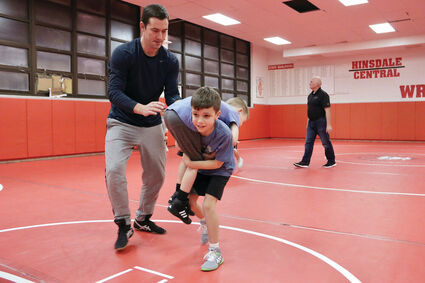 Today at Central wrestling's senior night, the kids will cheer on their mentors at the home meet.

"A feeder program is definitely needed. This is how we get the bulk of our kids," he said. "You want the elementary kids to have fun, and the middle school kids you want to try and develop them with a little more technique."

"As more people talk about it, I think we're going to see a bigger influx (of kids)," Bazan said. "It fills both buckets - individualism as well as supporting teammates."