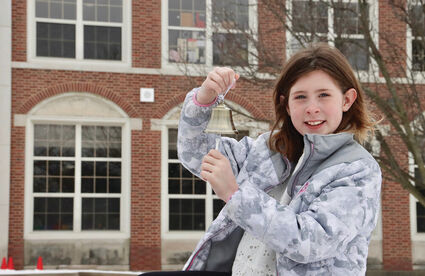 Elise Allison, a fifth-grader at Madison School, rings the miniature bell she received as a reminder of the day she rang the bell at Lurie's Center for Cancer and Blood Disorders to mark the end of her leukemia treatments. (Jim Slonoff photo) Elise (second from right), sister Nora and parents Maggie and Matt Allison celebrate the end of two years of treatments Dec. 8.

At first, 8-year-old Elise Allison noticed she was feeling tired and getting bruises on her legs. When she turned very pale after running in the Madison School Dash & Bash at the end of September 2019, her mom, Maggie, knew something was wrong.

A trip to the doctor confirmed every parent's worst fear. Elise had cancer. Leukemia.

After receiving the devastating news, Maggie and Matt had to figure out how to deliver it to their daughter.

"That night when we came home, my mom and my dad talked and I went into my room," Elise said. "And when they told me, I didn't know it was cancer for a second. I said, 'At least it's not cancer.' "

Her dad corrected her.

"I started crying. I was really sad," she recalled.

Elise had B cell acute lymphoblastic leukemia, one of several types of leukemia and the most common cancer among children.

"That's the better one," Elise said. "The treatment for it is a lot better."

The next morning Elise was in the operating room getting a port so chemo could begin. Her treatment included intravenous infusions and lumbar taps, along with oral chemo she would take at home. The chemo made her tired and crabby, she said.

But those weren't the only side effects.

At one point in March 2020 her white blood cell count dropped to zero and she developed a severe case of mucositis, painful mouth sores that prevented her from eating or drinking. On top of that, she had to get a nasal swab to test for COVID-19 when she arrived at the emergency room.

"I was one of the first kids to get the test, and it annoyed me so bad," she said. "I started crying it hurt so bad. My mouth hurt so bad. It was a very bad experience."

Elise needed a transfusion to raise her counts, but blood was in short supply due to the pandemic. She said that was the most frightening part of her whole cancer experience.

"I was freaking out with COVID just happening and there was no blood," she said. "I was terrified.

"But then somebody found blood. We were so happy."

On the advice of Elise's doctor, who wanted her life to be as close to normal as possible, she was back in the classroom two weeks after her diagnosis. She continued to go to school throughout her treatments, unless she was too sick. When she had to stay home, her teacher, Amanda Layden, was there to support her.

"We loved our teacher that year," Elise said. "She used to come to my house and help, and now my sister has her and we're really glad."

Her classmates learned more about cancer and what to expect when a woman from Gilda's Club, a nonprofit cancer support community in Chicago, came to Madison School to talk to them. She spoke with Elise's Girl Scout troop as well.

"She was amazing," Maggie said.

Another organization that has made a difference is Make a Wish. Elise's wish took the form of a tri-color Bernadoodle puppy she named Luna.

"She is adorable. I love her," Elise said.

Even before her treatment at Lurie's Children's Hospital ended, Elise started eying the bell she would be able to ring to mark its completion.

"You walked by it every time you went to clinic," her mom said.

Elise said she would see it and send it a message.

Then, in December, the big day came.

"I was kind of trying to hurry it so I would be fully done," Elise explained. "You have to read something. I was reading it really fast. And then when I rang it, I was so happy."

Now Elise is ready to enjoy the everyday life of a 10-year-old.

"I'm really looking forward to everything being back to normal and hanging out with my dog," she said.

The experience has given the whole family a new perspective, her mom said.

"We appreciate every day, Maggie said. "We've come to realize that today is OK, and we don't worry too much about everything else. Our community is amazing, and I'm thankful for Lurie."

Their neighbors organized meal trains and car pools to get Elise's sister, Nora, to her activities. Among those neighbors is Elise's aunt, Liz Weir.

"My sister lives down the street. I don't know what I would do without her," Maggie said.

"We have some good friends here," Elise chimed in.

The family now hopes to help others. They donate blood at their club, Salt Creek Club, which began holding blood drives in the spring of 2020. And the family is working to support kids with cancer through Elise's fundraising page, http://foundation.luriechildrens.org/goto/SweetEliseShares. They've already raised $500.

"All my mom's friends are helping us donate to charities," Elise said. 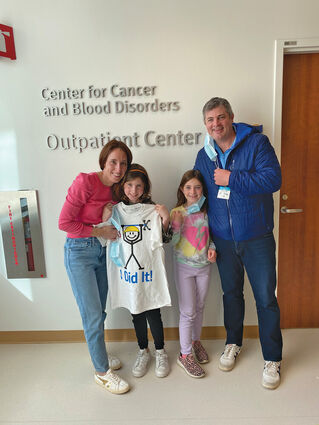 Elise also has worked to make sure other kids with cancer can enjoy the bubble baths she loved to take after her treatments. The family convinced the Lush company to donate its bubble bars for the in-patient kids on Lurie's oncology floor.

"Elise is so proud of that and happy to help brighten their day a little," Maggie said.

The strength Elise has exhibited over the past two years has amazed her mom.

"Elise, in my mind, was just a rock," Maggie said. "Even knowing it was going to be a bad day of treatment, she would get up and never complain and go. She just got through it."

For someone so young, Elise has developed a very pragmatic look on life.

"Sometimes it can surprise you, but you've just got to keep working through it," she said.