Lifelong Hinsdalean was a true friend

Steve Foster never shied from embarking on new path, extending love every step of the way 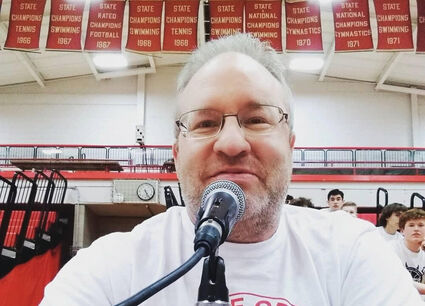 Steve Foster was a regular at Hinsdale Central sporting events, often behind the mic as the announcer and always willing to help his alma mater as a second generation and proud Red Devil alum. (photo provided)

Hinsdale's Steve Foster took a good friend to Wrigley Field last Labor Day to watch his beloved Cubbies. Suddenly a foul ball sailed their way and landed just behind their row. Steve was quick to retrieve it.

"Just as quickly he handed the ball to me with a request to give it to the young girl siting across the aisle from us," according to an account by that friend, relayed by Steve's brother Jim at a Nov. 13 memorial service.

Jim held back tears as he read how the girl's face beamed with joy.

"This small gesture epitomized Steve's life," he continued. "His actions toward people were easy, natural and visceral, because Steve put others before himself."

The village native and proud Hinsdale Central alum passed away Oct. 4, survived by his mother, Jane, and older brothers Jim and Mike, along with a large extended family. Steve was 56.

The Foster home of Steve's childhood sat right near Burns Field, the hub of activity any time of year, whether skating in winter or Whiffle ball games in warmer seasons.

"On summer nights he could not finish dinner fast enough to go over the park to watch the men's 16-inch softball games," Jim related.

"He was in the water constantly." mom Jane said.

Steve attended Monroe and Walker schools and Hinsdale Middle School en route to becoming a Red Devil like his father and brother before him.

Jane said her youngest son was also her most independent.

"He was not a snuggler from the time he was born," she remarked. "He wanted to do what he wanted to do. And he did it."

From working as a graphic designer and a caregiver to being an extra on big and small screen productions and announcing Central sporting events, Steve found numerous outlets for his talent and versatility.

"He would record the likes of John Records Landecker, Larry Lujack, Steve Dahl and Jonathon Brandmeier. He would then record himself doing those same shows," he said.

The Young Life youth ministry was a vital community for Steve in high school, and his Christian faith remained a defining part of his life. After graduating from Central in 1983, "Little Fos," as he was often called, earned an associate's degree at College of DuPage followed by a degree in visual communications from Northern Illinois University.

He was involved in a serious head-on vehicle crash in 1990 that required weeks of hospitalization and rehab and left him with some permanent facial paralysis and hearing loss. But he battled through.

"God had more time for him here," Jim said.

Steve headed west to work as a graphic designer in Denver, and twice traveled with members of his Colorado church community to Uganda for mission work. He was so stirred by the needs he witnessed that he began financially supporting a 7-year-old Ugandan girl, an ongoing investment that continued to the present.

"She's now just a beautiful young woman, still living in Uganda," said Jim, who had been in touch with her.

Returning to town, he helped with marketing at the family's C. Foster Toys shops in Hinsdale and Oak Park but was not interested in taking over the business from his dad Chuck, according to Jane.

In 2005 he landed his most cherished job handing PR for the Chicago Bandits of the then-startup women's professional softball league, often accompanying star pitcher Jenny Finch to events. He later held jobs in communications with the Christan Church of Clarendon Hills and most recently worked as a certified caregiver and taught students with special needs.

Throughout he lent his vocal gifts to his alma mater whenever called upon. Central athletic director Dan Jones said Steve was an invaluable resource.

"Not only did he announce, but he also worked the game clock for games in basketball, soccer and lacrosse. If we ever needed somebody at the last minute, he was there, and many times volunteered his time to just be at the event to help us," Jones said. "Steve is missed at HCHS and we are grateful for the time he spent with us."

Steve lovingly cared for his aunt in her final years, was a leader in local Celebrate Recovery support groups and was a familiar face in multiple faith communities.

"He touched a lot of lives. There were at least 14 churches that were praying for him," Jane said.

When Steve was admitted to Amita Hinsdale Hospital in late September for what he thought was kidney stones, close friend Lisa Wilkins offered to bring him home. She never had the chance as he suffered respiratory distress and never recovered.

At his service she read the Serenity Prayer - Steve's favorite - seeking surrender to God "so that I may be reasonably happy in this life and supremely happy with you forever in the next."

A decorative Christmas tree still stands on Jane's balcony, right where Steve would set it up for her every year. She's in no rush to pack it away.

"I think of him every time I look at it," she said.