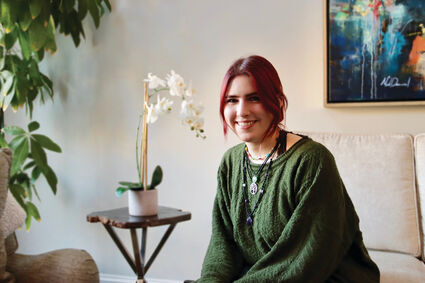 Solstice Magazine has long served as the repository of Hinsdale Central's cultural arts.

For the last four years, senior Lauren Peters has helped curate the annual literary and visual arts publication, a pursuit she suggested is a labor of love.

"My freshman year a couple of my friends had also joined Solstice, and I went along with them," she said. "I just knew I really wanted to be involved with something that really involved writing and art."

The commitment of Peters and her peers has been rewarded with national recognition the last four years in the form of a Crown Award from the Columbia Scholastic Press Association. The 2021 edition of Solstice was recently named a finalist for the honor, presented to a student print or digital medium for overall excellence.

"It was really great to hear that," Peters said. "Just being a finalist, there just are not many schools that get that award."

Not many that aren't named Hinsdale Central, anyway. It's the second straight year for the accolade after the 2020 release was given a Gold Crown, the top prize.

"It was really exciting," said Peters, who was literary editor for last year's magazine. "I was just really proud to have actually been a part of the head staff and to get an award, really proud that we were able to overcome quarantine to do it."

Submissions are collected from students into February, then Solstice members perform the tough task of selecting the ones to publish.

"We've been receiving quite a bit," she said.

Club sponsor and English teacher Angelique Burrell sets up a spreadsheet of all the entries - anonymously so there's no bias. Teams for each category meet to evaluate them. Peters heads up photography this year.

"Once we have all the entries, we have a discussion,:" she related. "It can definitely be a bit complicated, but we have it really organized," she said. "If we didn't have as dedicated of members, it would be a difficult process. But everyone works together to make it really smooth."

The process got a little rocky with quarantine, but video conferencing proved a workable backup.

"Toward the end of (last) year, we were able to meet in person," she said. "We definitely had to be very flexible."

Since her sophomore year, Peters has been active with Centrals' poetry club, stepping up as captain this year. The group is preparing for Chicago's Louder than a Bomb event, the largest slam poetry competition in the country held every February.

She recalled a group poem she was part of first year.

"It was a piece about sexual assault, and I just liked the way all four people came together to work on it," Peters said. "It's also helped me grow as a person with my confidence and public speaking."

Peters, who's awaiting response to her college applications, plans to pursue graphic design and possibly journalism as an undergrad.

Before then, she aims to deliver the best edition of Solstice she the rest and the team can, And find out if another Gold Crown arrives this spring.

"I've just really enjoyed getting to read about so many experiences that people have had and talk with the writers and connect with more Central students," she said.