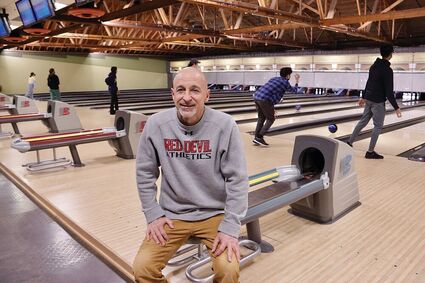 After two decades as Hinsdale Central varsity boys bowling coach, Alex Hipskind is a familiar face at the team;s home turf of Suburbanite Bowl in Westmont. The first and only coach in the program's history relishes getting to know his players outside the confines of the classroom. (Jim Slonoff photo)

He had, after all, been on track to give legal advice, not lane assignments.

"I went to law school at Loyola (University) and I got my JD, and I passed the bar," Hipskind related.

During his studies he participated in a program in which he taught a law class at a Chicago high school. Something clicked.

"I just enjoyed it, working with young people, and it kind of planted a seed," he said.

Hipskind eventually returned to Loyola to obtain his master's in education and landed his first teaching job in the social studies department at Hinsdale South in 1993. A couple years later he was asked to split time between South and Central.

"That 95-96 school year, I taught periods one, two and three at Central, and then I taught the last two classes at South," he recalled.

"I always envisioned myself just coaching soccer and not anything else," Hipskind acknowledged.

But when bowling became an IHSA sanctioned sport in the 2002-03 season, he was all in.

"I had played recreationally in college and thought I could do a good job with it," he said.

The Constitutional law and civics teacher admittedly leveraged his instructional role to recruit for his roster.

"That first year I had 12 (players)," Hipskind said, "We've never really worried about the numbers."

At one of the first big tournaments the team attended, he saw his first two-handed bowler on another squad. The results were impressive.

Nearly two decades later, the method is no longer a novelty.

"Almost every kid does that now," Hipskind said, noting that rules require the finger holes to be filled in if not used. "I really do not have a one-handed bowler anymore."

Like so many advances, he said the technique has pros and cons.

"You can see more immediate results, but I think you plateau quickly," he said.

Hipskind grew up in Roselle and went to Loyola to get his bachelor's and play soccer. His sporting highlight from those days was scoring the game-winner for the Ramblers against his older brother's Bradley Braves.

As a coach, he's relished the times he and his teams have reached the state tournament.

"It's kind of a culminating activity to take those kids to state. I've been blessed I've been able to do that a few times," said Hipskind, who has continued to lead the JV girls soccer team in the spring.

Coaching is a dimension of a teaching career he's always gravitated to for more authentic engagement.

"I felt like that was part of education - it's not just what you do in the four corners of the classroom, but the kids should also see, outside of that classroom, what you're like and what you know and how you conduct yourself as a coach/leader," he commented. "You really get a different perspective on each of the individual students/athletes. It's just nice to get to see them in a different element."

It also helps fuel his energy as a teacher.

"It keeps you young, keeps you feeling like you have some kind of purpose," Hipskind said.

In addition to the in-season, the payoff also comes those times he hears from alums.

"I think it's really nice that former students reach out to me a lot," he said. "Once in while you reconnect with them, and you realize, 'Wow! I've been here a long time.' "

Hipskind has sensed the importance of team fellowship during the pandemic, with kids' normal activities having been so disrupted.

"This has been a difficult stretch for everybody, so just to give any of these kids a different outlet and reason to get out of the house, it's really nice," he said.

The father of a 12-year-old son and two daughters, 10 and 6, said coaching has helped him become more flexible and adaptable.

"I think I've learned to roll with the punches and recognize what's a hill worth dying on and what's not," Hipskind said.

Hipskind marvels at the maturity level of the teens he interacts with and how much he gleans from them.

"To me, it's just refreshing to be able to work with these young people," he said, "They're fun to be around, they're interesting, they're really coachable kids. I've been really lucky with that."