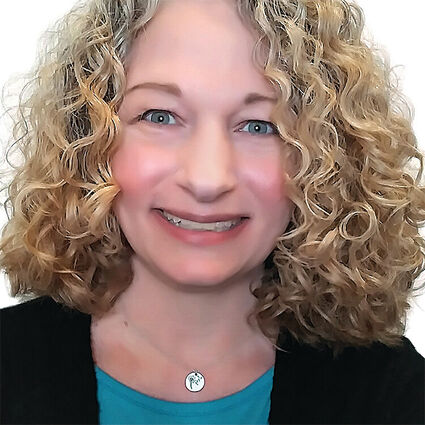 Professional organizer Jamie Novak will share practical tips from her most recent book, "Keep This, Toss That," with Hinsdale Public Library patrons in her Jan. 15 virtual program. "Life is messy, it comes with stuff," said Novak, who found inspiration for the book topic through her deliberations over how many coffee mugs she should have in her collection. (photo provided)

How should people approach home organization?

2022 is the year, right? The year to get organized, declutter and find peace through purging.

"We start out with the best of intentions and strong energy, right about the turn of the calendar," Novak said. "Then two to three weeks into January we're already putting it off to next year."

Novak will share her tips on effective organizing in her "Keep This, Toss That" virtual program at 2:30 p.m. Saturday, Jan. 15 (see Page XX for details).

She cited an overly aggressive vision as among the most common pitfalls.

"It's like, 'I'm going to organize my whole house - the kitchen, the basement, the attic, all those papers, ' " Novak said. "We can't possibly do all that. We're setting ourselves up for failure."

Better to break up the grand plan into bite-size increments, she suggested.

"Instead of thinking all or nothing, my advice is to think about tiny tasks that will lead to success," Novak said.

Set a kitchen timer for 10 minutes to help pace the work.

"Just do one shelf in the kitchen or just tackle the gardening section in your garage," she counseled. "Little by little you're breaking bad habits. Once you see a little progress, the momentum builds to keep it going."

"I love starting in the bathroom medicine cabinet because it's a place where we spend time first thing in the morning," she said. "You're really building the muscle of learning to let go."

The fear of making a wrong decision can also be an obstacle, she noted, predicated on the unlikely chance that the item might one day be needed. Consider donating the item for someone else's benefit.

"The question to ask is, 'Would someone get more use out of this than I would?' " Novak said, adding that reuse is preferable to landfill refuse.

She's a proponent of the "one in, two out" philosophy when acquiring a new item.

"That way we're paring down," she remarked.

Novak said on many occasions, after helping someone declutter before moving out, the client finally recognizes the home's potential.

"Now they love the home but they can't benefit from the space they have created," Novak said. "(Organizing is) such an opportunity to create that space that you love."

She promised those participating in "Keep This, Toss That" can expect some light-hearted humor and transparency from the presenter.

"We're going to have a lot of laughter," Novak said. "I share my own clutter on camera. Everyone is always shocked when I show my collectibles."

There also will also be a short interactive portion in which attendees will be guided through a live "tidy-up" session.

"By the time they log off, they'll have their jumpstart," Novak said.

And the benefits go beyond having less stuff around.

"Your stress level goes down, your free time increases and the result is having a home they love to live in."