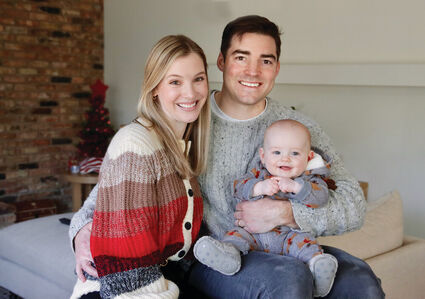 Hinsdale's Conor Real was at a friend's gathering this fall with some longtime pals. Taking in the scene, he was struck by life's unfolding phases.

"Five years ago we're going out in the city. Now all of us are around a backyard fire pit each holding our own kid," he said.

The little one in Conor's arms was Cormac, whom he and wife Maureen welcomed in June. Cormac was crowned The Hinsdalean's Happiest Baby of 2021 (look again at the cover to see why), and he's certainly brought joy to his mom and dad.

"I think the most fun has been once he started smiling and laughing. He's so engaged," Maureen said.

The year has been a particularly transitional one for the Reals. In March the couple migrated from Chicago to the village, not far from Conor's Burr Ridge roots. About four months later they entered parenthood, able to get the nursery outfitted but with little time for more extensive home decor.

"We have a friend who's trying to build her interior design portfolio, so she was able to help us out with the entire first floor," Conor said.

Maureen, a native of Grand Rapids, Mich., and youngest of six siblings, said their pregnancy announcement came around the holidays last year.

"He's number 17 on my side," she said of Cormac's rank in the cousins' seniority roll.

The two first met as students at Marquette University. Maureen later transferred to Michigan State, but their relationship was rekindled once both were living in the city. They went suburban house-hunting during the hot spring market, hoping to land along the BNSF line.

"(Our agent) was like, 'You've got seven total homes to look at, basically.' And we looked at all of them," Conor said.

Once Cormac and Maureen were released from the hospital, the family could finally settle in. At least for 15 minutes.

"Our power went out the day we got home," Maureen said.

It was restored after a couple steamy hours, but the episode underscored that a new adventure had begun. Their block also should provide plenty of action.

"We've got a lot of kids on the street, which is awesome," Maureen said.

Her twin brother, who lives in the area, had a baby girl in April. They decided to hold joint baptism to optimize - and economize - the celebration.

Like all fledgling parents they have a newfound appreciation for sleep and an abiding fear of overlooked household hazards. Now 6 months old, Cormac is starting to roll and showing signs that crawling will soon follow.

"We're already planning on how to build a kid (enclosure) down in our basement," Conor said.

"I feel like the development just explodes. Every week is something new," Maureen added.

Cormac is fascinated by the sound of crinkling chip bags and the magical refrigerator water dispenser.

"He's pretty much just grabbing everything and playing peek-a-boo and chewing on everything," Conor said.

They relish their babysitter and the family support network that enables them to maintain date nights. But no more all-nighters.

"We're pretty low-key these days," he acknowledged. "Probably on New Year's will be asleep by 10 or 11 o'clock."