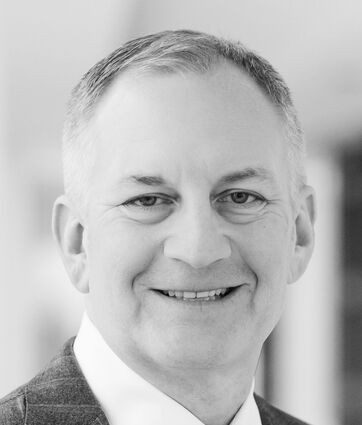 Tim was born in 1966 in Syracuse, N.Y. His family moved to Oneida Lake in central New York when Tim was young, which engendered his lifelong love of boating and water sports and led to his enduring passion for Syracuse University basketball. He graduated from Chittenango High School in 1984, where he excelled in academics and athletics such as soccer, basketball and tennis. Tim then matriculated at University of Rochester, where he was near his maternal grandparents, Bernard and Irene Mysliwiec, with whom he lived during graduate school while completing his MBA from the Simon School of Business at U of R. In 1991, Tim accepted a job offer from National City Bank in Cleveland, Ohio, as a corporate lending professional.

Once he moved to the Cleveland area, his adult life took shape. He married Kristen Dougherty in Cleveland on June 15, 2002, and they moved to Chagrin Falls. Once there, they started their family with the births of Lorraine Elizabeth (known as LE, now 17 and a senior at Nazareth High School), and twins Roarke (Rory) Joseph and Olivia Ann (freshmen at Hinsdale Central High School, now 15).

Tim later worked at Linsalata Capital Partners as a private equity investment professional in the Cleveland area for 13 years, where he became partner. He also built many long-lasting friendships. After his time at Linsalata, Tim co-founded Empire Dental Arts with Dr. Todd Russell, where he was instrumental in raising capital and structuring the business as a new way forward in the multi-location dental practice industry.

In 2018, he accepted a position as managing director with Twin Brook Capital Partners in Chicago and put down roots with his family in Hinsdale.

Tim was an incredible father and his love for his children was immeasurable. Tim took great joy in cheering on each of them as they pursued whatever endeavors they loved. The family enjoyed traveling, recently discovering the joy in visiting the national parks, while still sneaking in a round or two of golf on every trip.

Tim also enjoyed skiing, and at his brother's urging even braved snowboarding - which, of course, he mastered quickly. The family ski trips were a source of particular joy for Tim and the whole family.

Tim was preceded in death by his father, S. Joseph Healy; and his father-in-law, Thomas Dougherty.

He is survived by his wife, Kristen; his three children, L. E., Olivia and Rory; his mother, Elizabeth Anne Healy; his mother-in-law, Victoria Dougherty; his brother, Joseph (Robin); his sister, Jennifer (Peter) Lowenberg; his sister-in-law, Colleen (Paul) Collins; and his nieces and nephews, Teagan Healy, Thea, Finn and Sadie Lowenberg, and William, Zachary and Ryan Collins.

A memorial reception will be held from 5 to 8 p.m. Thursday, Jan. 6, at Chicago Highlands Club, 2 Bluebird Trail, Westchester.

A celebration of life and reception will be held at 11 a.m. Saturday, Jan. 15, at Federated Church, 76 Bell Street, Chagrin Falls, Ohio.

In lieu of flowers, memorials may be made online to the Gift of Hope (Organ and Tissue Donor Network) at https://www.giftofhope.org