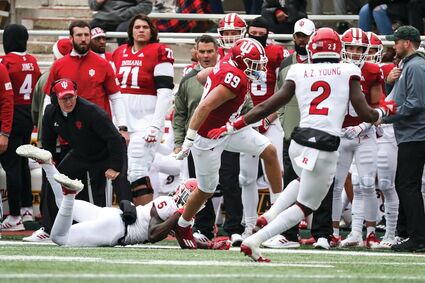 Red Devil Nation has been well represented in Division I football programs across the country the last four-plus years thanks to these former Hinsdale Central standouts. Learn about their journeys.

After a snowy home victory over Penn State Nov. 27 closed out Matt Allen's tenure with Michigan State, the Spartans' stellar center just took in the moment.

"Before I left the field, I just kind of looked back at everything and thought about all the years I watched my brothers play, hoping that I just had the opportunity to play there," he said.

That opportunity began in 2017, playing alongside older brother Brian, who had played with eldest brother Jack. He quickly made people recognize the value of the youngest Allen, playing in 43 games and starting in 29 across five seasons. A foot injury brought his 2020 campaign to an abrupt end and put a 2021 final season in doubt.

"I was kind of upset when it happened, but I said, 'God, whatever plans you have for me, I'm all for it," said the faith-led Allen.

A post-season meeting with coach Mel Tucker made it clear.

"When I was a younger guy coming up, I needed a ton of help," he said. "I was looking forward to the opportunity to give back and help lead them in the right direction."

Among the highlights of his playing career was a last second victory-clinching touchdown at Penn State in 2018 and this season's emotional comeback win over in-state rival Michigan.

Allen's next appointment on the field is at the Chik-Fil-A Peach Bowl Dec. 30 in Atlanta. Pro scouts will no doubt be watching in preparation of April's NFL Draft.

"I'm going to see what happens," he said of the draft, having watched brother Brian be a fourth-round selection by the L.A. Rams in 2018 and brother Jack join the New Orleans Saints as a free agent in 2016.

With degrees in both food industry management and communications, the future holds tremendous promise. And he'll have great memories to take with him.

"The moments I shared with my teammates in the locker room, our stupid but funny conversations we've had over the years, is what I'll miss most," he said.

Hinsdale's Matt Bjorson will never forget when his Indiana University team took the field at University of Nebraska in 2019.

"It was awesome because it was coach (Paul) Allen's first bowl game as head coach for Indiana," Bjorson said.

Bjorson played every game as a freshman, sophomore and junior. He hauled in a 15-yard reception in his very first game, buoying his collegiate confidence.

"It was like a sigh of relief, and then you're not nervous the rest of your time," he said. "Playing as a freshman gave me an advantage whenever I was out there."

Although fans were not allowed into games last season due to COVID-19, the team's success had Hoosier Nation's energy surging.

"You walk outside the stadium and there's like 20,000 people out there. It was awesome," he said, citing the thrill of competing before this season's sold-out crowds.

As a senior leader, Bjorson said he's tried to let his actions do his talking.

"I think basically I show that I'm a hard-working kid in the way I lead the team," Bjorson said.

His freshman focus on "trying to get big" was supplanted by a focus on toning for more speed in his special teams role.

"I'm more athletic than I've ever felt," he said, noting, "I've made a few tackles in my career."

After Bjorson's junior year he was honored by his team with the "Mental Attitude" Award. He said Central helped prepare him for the rigors of college as a public management major.

He reflected proudly and poignantly on his IU career.

"It was just a sad last moment with each other (after the last game), but it was an awesome four years," he said. "The memories are so special, I wouldn't trade it for anything. I love playing here."

Doug Kramer's college football resume stretches out in lengthy fashion with individual accolades and achievements. But for the center and offensive line member, it's always about the team.

"The offensive line is based on five guys doing their job at the same time, and that performance can determine the outcome," Kramer said. "It helps you play better when you play for the guys next to you."

The individual laurels are nice, of course, like being named All-Big Ten second team by the coaches.

"It's definitely cool when the coaches recognize you as one of the best players in the conference," he said.

Competing in the Big Ten means playing in front of packed stadiums and hostile environments on the road, like the Fighting Illini faced on Oct. 23 against top-ranked Penn State in State College, Pa. In a stunner, the record-setting nine-overtime contest ultimately went the visitors' way.

"That was definitely the loudest (game) that I've been to," Kramer said. "It brings your team closer together because it kind of feels like us versus the world."

He experienced the thrill of starting as a redshirt freshman and the agony of bing sidelined by injury the same season.

"In high school I had never been hurt," he said. "I just had to rehab and try get back on the field as quickly as possible."

Kramer was recruited by one head coach and played for two other ones during his six seasons (eligibility extended one year due to COVID-19).

"Change is kind of inevitable. You've got to take it as an opportunity to get better through change," he said.

Finishing with a win over rival Northwestern and hoisting the Land of Lincoln Trophy was sweet.

"We hadn't beaten them before that, so to hold that trophy was really cool and definitely one of my top moments," Kramer said.

A series of all-star exhibitions the next couple of months is aimed at setting him up for the NFL Draft.

"It's what's you've been working for your entire life," he said of making it to the NFL. "I'm just taking it day by day and trying to get better."

On his first day of Colgate University football practice the summer of 2018, wide receiver Garrett Oakey lined up opposite his new teammate, an All-American defensive back.

Right from the jump, the Central star got a harsh reminder that he wasn't on Dickinson Field anymore.

"He jammed me at the line and put me in the stands," Oakey said. "Once you get to this level, every single person on the roster was that high school player you had to watch out for."

Fast forward to last month. Senior Oakey and his Raiders were locked in a 13-13 tie at Lafayette College with just over minute left in the game. Colgate had the ball near midfield but needed a third-and-long conversion to keep the drive alive.

"The call was for a deep pass. I was running when all of sudden I just see the ball flying through the air," he related. "I dove for it, stretched out and caught it at the 15-yard line." 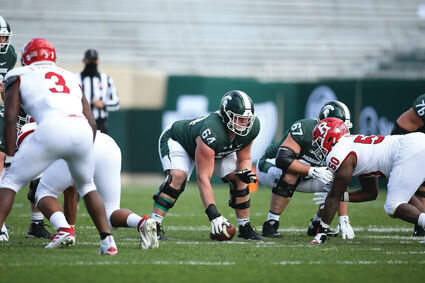 The clutch reception - thrown by fellow Red Devil alum Michael Brescia – set up the game-winning touchdown. It even made ESPN's Top-10 plays that week.

"A lot of my friends saw it on television. I woke up to a lot of texts the next morning," Oakey said.

As a freshman, the Hinsdale resident earned the special teams award and was named Scout Team Player of the Year for helping prep Colgate's top-ranked defense for each week's opponents.

A starter as a sophomore, Oakey garnered the Unsung Hero Award for being second in the Patriot League in receiving yards. He's thankful to have had a full senior schedule, albeit with a bittersweet finale.

"It was the last time walking off the field with a lot of the guys I've been in the program with the last four years," said the political science major, noting he has playing eligibility left. "It's definitely taught me some of the most important lessons that I'll carry with me for the rest of my life."