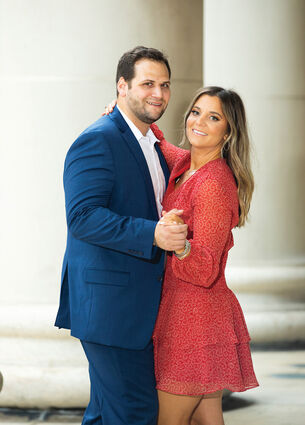 Sam and Madeline LoPresti of Hinsdale have announced the engagement of their son, Gaetano LoPresti, to Liana Marino, daughter of Frank and Sara Marino of Willowbrook.

The bride-to-be is a 2010 graduate of Hinsdale Central High School. She earned her bachelor's degree in elementary education from Illinois State University in 2014 and her master's in teaching in learning with an endorsement in English as a second language from St. Francis University in 2018. She currently works as a fourth-grade teacher in Downers Grove Elementary District 58 and as the head cheer coach for Hinsdale Central.

The groom-to-be is a 2007 graduate of Hinsdale Central and a 2011 graduate of North Central College, where he received a bachelor's in history and sociology. He is an executive sales producer at LoPresti Allstate Insurance Agency of Hinsdale.

The couple plans to marry at St. Isaac Jogues Church in Hinsdale in the spring of 2022.