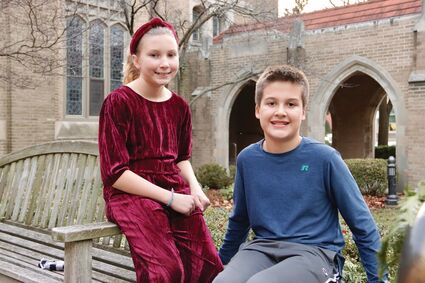 Few 2,000-year-old stories get an annual retelling, let alone theatrically depicted in cities and towns across the country.

For many churchgoers, the Christmas Pageant is a cherished live-action reminder of the events giving rise to our modern-day celebration. And for the youth in those faith communities, it's an opportunity to carry on the generations-old tradition of portraying characters in that sacred scene.

This Sunday, Union Church of Hinsdale will present the pageant at its 10 a.m. worship service. Topping the bill are Hinsdale's Vivi Kapcar as Mary and Charlie Parwani as Joseph, both seasoned veterans of the production.

Vivi, a fifth-grader at Monroe School, said her earliest memory is being part of a heavenly host around age 5.

"I remember a little bit of being an angel, but not much," she said.

"I remember being an animal - I think I was a donkey my first year," he said.

Now, after years of paying their dues, the two will take center stage, which at first was an intimidating proposition for Charlie.

"It kind of was more scary because I knew I would have a lot more lines to memorize," he said

Charlie is actually reprising his Joseph after being one of several Jesus' dads in last year's online version.

"It was through Zoom, and it was kind of weird because there were three or four Josephs for different scenes," he related.

Vivi, having witnessed her older siblings go through the rite of passage, was eager for her turn.

"I wanted to be the main role," she asserted.

Historians say that in medieval times, the Nativity story was acted out on traveling wagons as part of religious dramas about the life of Jesus. St. Francis of Assisi is credited with popularizing the reenactments conducted in churches today. He reportedly staged a depiction of Jesus' birth - including live animals - in a candlelit Christmas Eve service in 1223.

No live animals are featured in the Union Church version, but the costuming strives for authenticity. That has taken some adjustment.

"It's not easy having to wear my costume because you feel really different," Charlie said of his Joseph robe and traditional head covering.

While the two acknowledge their dialogue requirements are not extensive, having to project confidently before a full sanctuary of intently listening congregants adds a daunting dimension to the experience. With only three rehearsals to refine their craft, practicing at home - especially the songs - is critical.

"Some are pretty long," Vivi said.

But one those classic carols is her highlight of the pageant.

"Every year (we sing) 'Silent Night' at the end, and I like that," she said. "Usually everyone in the sanctuary sings."

Last week the 32 pageant members did a run-through of the score by performing for the residents of Magnolia Senior Living in Hinsdale.

"It was fun," Vivi said, adding she also enjoys mentoring her youngest castmates.

Charlie said his appreciation for the story has grown as he has.

"It sort of makes more sense as you get older," Charlie said. "I think it brings a lot of people happiness."