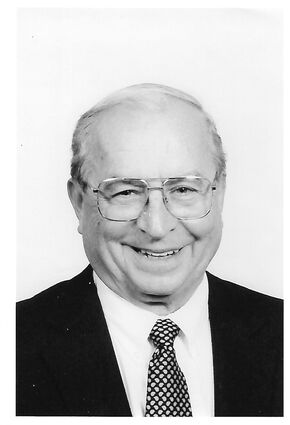 Jim was born and raised in Riverside, the son of Louis and Ruth Pavlicek and the brother to Ruth (Charles) Carroll.

Jim attended Riverside grammar schools and graduated from Culver Military Academy. He married the love of his life, Phyllis Baltis Paul, in 1952. Jim graduated with a bachelor's in chemistry in 1953 from Northwestern University in 1953, where he was a member of Delta Tau Delta Fraternity.

Upon his college graduation, Jim served his country as a first lieutenant in the United States Air Force at the end of the Korean War. He was stationed in Madera, California. Once his service was completed, Jim enjoyed a career with his father-in-law as general manager of Baltis Built Homes from 1956-86. Jim continued his general contracting business when he established James Paul & Associates, Inc. then more recently, partnered with his sons in their commercial real estate development business.

In 2008, Jim lost his beloved wife, Phyllis, to ALS after celebrating 56 years of marriage.

Jim was civic-minded and with Phyllis' support, he was involved in his community. Jim served on the District 96 Riverside Public School Board and was one of the teams that led a successful Riverside-Brookfield High School referendum. He served on the board of directors and as president of the Riverside Little League then became a district administrator in the State of Illinois. He also he served as a village trustee and police and fire commissioners in Riverside. Among his many village board accomplishments, Jim was responsible for bringing Lake Michigan water to Riverside. Jim belonged to the Riverside Golf Club, where he was a member of its board and served as club president. Jim and Phyllis shared fond memories of wintering at the Deerfield Manor Club in Deerfield Beach, Fla., where Jim also served on the board of directors.

In lieu of flowers, memorials may be made to Catholic Charities of the Archdiocese of Chicago, P.O. Box 7154, Carol Stream, IL 60197-7154 or online at https://[email protected]

A Mass of the Resurrection will take place from at 11 a.m. to noon. at the church.