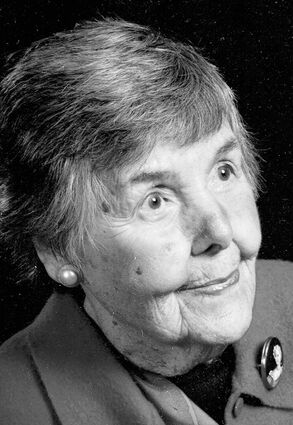 She was born in 1920 in Chicago to Thorwald B. and Alma O. Schnoor Petersen.

Jeannette graduated from Calumet High School and Morgan Park Junior College, where she met her future husband, Jack Morton Wentsel. She worked for the Work American City Bureau for several years. She married Jack on July 10, 1943, and they were married 69 years before his death in 2012.

During Jack's service in the Navy, they were stationed at Dayton, Ohio; Gulf Port, Miss.; and several bases on the east coast. After the war, they returned to Chicago and had a daughter, Jill, and a son, Randall. They moved to Hinsdale in 1954, where their son, Scott, was born.

Jeannette loved being a mother and grandmother and had a special relationship with each of her grandchildren.

Jeannette was a warm and caring person and she made friends easily. She enjoyed a busy social life and participated in multiple bridge clubs, a sewing club, a garden club, a golf group, a painting group and other activities. The members of one long-time bridge club served as the unofficial "CIA" for local information. She was a wedding consultant, a member of a women's unit and a participant in fundraising activities at Union Church.

Jeannette was a good cook and enjoyed inviting friends over for a meal. Jeannette's grandparents and parents were Danish, so all Danish food and crafts were incorporated into her life. Frikadeller (meatballs) and aebleskivers (apple fritters) were often prepared, and Danish baskets, ornaments and Nisse gnomes were used to decorate at Christmastime. Jeannette enjoyed various artistic activities, especially the Scandinavian painting technique of Rosemaling.

In later years, Jeannette and Jack vacationed annually in Kauai, Hawaii, where Jeannette made many more friends and learned to quilt in the Hawaiian style. Jeannette was a happy person and she wanted people to know that she had a good life and she loved every minute of it.

She was preceded in death by her parents; her brother, Allen; and her sister, Virginia.

A memorial service will be held at 1 p.m. Saturday, Dec. 18, in the chapel at the Union Church of Hinsdale, 137 S. Garfield St.

In lieu of flowers, memorials to the Union Church of Hinsdale Endowment Fund are appreciated.