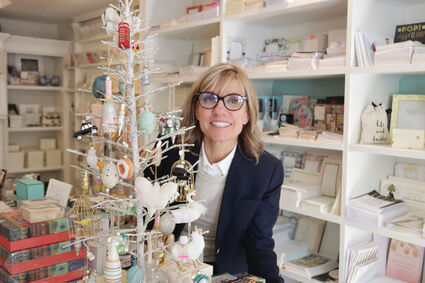 The holiday season is a busy one for Mary Beth Copeland and her staff at Sass-N-Class as they help customers design or pick out the right Christmas cards to deliver a personal touch to their loved ones and friends. (Jim Slonoff photo)

Why have Christmas cards endured as a holiday tradition?

In 1943, according to London's Victoria and Albert Museum, an artist was commissioned to create 1,000 engraved holiday cards by Sir Henry Cole, who would later become the museum's first director.

Recipients saw a joyful family toasting the holidays and flanked by images of charitable acts. A caption read, "A Merry Christmas and a Happy New Year to You." The gesture is believed to have launched the practice of exchanging Christmas cards, a custom that later caught on in the States in a big way.

Mary Beth Copeland, owner of stationery store Sass-N-Class in downtown Hinsdale, said physical Christmas cards continue to be an important seasonal tradition, even as digital platforms have made inroads with other occasions.

"People are connecting and writing notes in their Christmas cards," she remarked of the personal touch they deliver. "It's more about taking the time to write, is what I'm seeing."

Today, Dec. 9. has been designated as Christmas Card Day, presumably as an industry reminder to mail them in time to reach their destinations by the 25th.

Of the cards her store produces and sells, about 75 percent are photo-focused and the rest boxed sets. Just don't ask for Photoshop services.

"That's where I draw the line," she noted with a smile.

Letters accompany many to chronicle the year's highlights. Even when excessive, Copeland likes the details they provide.

"I know some of the letters are cheesy, but I love reading them just to see what's going on," she said.

Growing up in a tight-knit neighborhood on Chicago's south side, Copeland recalled the special ritual of holiday interactions, with cards a prized element.

"Some of them were all handmade, which was really interesting," she related, adding they were often personally delivered along with a baked treat. "It was really an art form. I don't see that much anymore."

Families may send one card from the children and another from the parents, Copeland said. Others use them to announce a recent move. If Copeland could point to positive from the pandemic, she would cite the way it has compelled us to appreciate and strengthen relationships through correspondence.

"People just want some personal contact again. And this is a way to do it, by writing," she commented.

Copeland's hectic pre-Christmas schedule has led her to send cards after the first of the year instead.

"I usually do a New Year's card and just give myself that grace," said Copeland, whose daughter's New Year's Eve wedding will likely feature prominently in the 2022 edition.

She suspects she's not alone.

"I'll probably do a good business for New Year's because people just can't get it together before the end of the year," Copeland speculated.

Will our children continue to honor this legacy? The Greeting Card Association is optimistic, proclaiming that "the tradition of giving greeting cards as a meaningful expression of personal affection for another person is still being deeply ingrained in today's youth."

Time will tell. For now, snail mailboxes continue to fill up.

"It's kind of fun to see everybody," Copeland said.