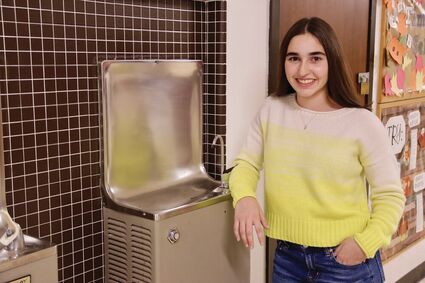 Sofia Giannini has always been one to toss her cans, bottles and papers in the recycling bin. But like most people, she knew little about what happened to those items once they were dumped into the recycling truck.

Giannini's entrepreneurial studies class at Hinsdale Central High School offered the opportunity to answer some of those questions, to follow those bottles and cans through the recycling process and to learn how she and others can become better recyclers. The assignment required the sophomore to embark on a project that would benefit a business or the community.

"We're constantly hearing about how much plastic there is and how important recycling is," Giannini said.

For her project, she set out to learn just how much impact one person could have on the environment through recycling. What she found is that she and many others can have a bigger impact by avoiding a few simple but common mistakes.

Giannini learned that one dirty can or unrinsed bottle can spoil an entire truckload of potentially recyclable items. Cleaning items before tossing them into the bin is important, she said.

"It can be a lot of work sometimes," Giannini said. But she said it's a small effort compared to the potential damage that an unrinsed item can cause. She also learned that paper labels complicate the recycling process. She now carefully removes labels before tossing items into the recycling bin.

Giannini said she uses a reusable water bottle whenever possible, but she also learned that the energy saved by recycling just 10 bottles rather than producing new ones can power a computer for 25 hours. Giannini's research also taught her a lot about the use of plastic bags. First, she learned that recyclables should be placed directly in the bin rather than bagged. To further protect the environment, she's committed herself to using fewer plastic bags overall. The solution, she said, is to use reusable bags whenever possible, both for carrying home purchases and storing food.

"That can help the environment just as much as recycling can," she said.

"A big part of the class is figuring out how to overcome your failures," said Giannini, who will present her recycling discoveries to the rest of the class via a PowerPoint presentation.

She's also preparing for a future in the business world through her participation in Business Professionals of America. A student organization with 1,800 chapters, BPA offers students opportunities to grow and learn through education, competition, community service and personal development. Giannini is currently working on a group project and a solo project, both of which will be presented to a panel of judges in January. The group project involves a website design about carbon footprint reduction, while the individual project tasks Giannini with designing a logo and slogan for a business campaign.

While entrepreneurial studies is the first business course on Giannini's high school schedule, it won't be the last. She said she looks forward to studying many aspects of business and intends one day to own her own company - a company that no doubt will promote proper recycling.