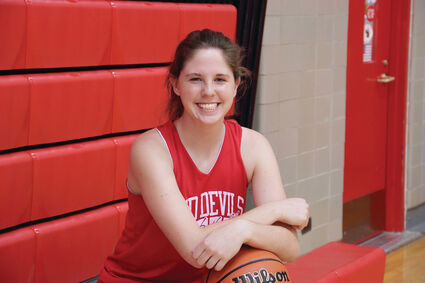 When did you know you wanted to pursue basketball?

My whole life I've kind of been pursuing the sport. I had two older brothers that played basketball, and my dad was always the coach. Watching them as role models, basketball became my true passion.

How have you improved as player since freshman year?

I think I've improved as an athlete and a leader on the court. I've had a bigger role on the team each year, and I've become more competitive and understand the true meaning of being part of Hinsdale Central girls basketball.

What does it mean to be team captain?

It's really something I aspired to be for the last four years. I looked up to the upperclassmen captains and now to be a leader for my team and be a role model is special. I really try to set the tone for the team and help us to grow.

Do you have any pre-game routines?

Probably just blasting music in the locker room before the game to get us hyped up. And I always eat Jolly Ranchers before a game.

I think they would describe me as competitor, aggressive and hard-working.

Probably my favorite dish to cook is chicken Parmesan.

What are goals for the season?

Sophomore year I knocked out my two front teeth in practice.

I hope I'll be working as physical therapist and living in Chicago - with a bunch of dogs.

Do you have any pets now?

Why does head coach Karen Persinger like having Monyek on the squad?

Eleanor and her fellow seniors have done so much for this program and the direction it is heading. Eleanor is a leader on and off the court, demonstrating the work ethic and dedication it takes to get better everyday. Her energy and enthusiasm for the game, her teammates and this program is a huge part of who she is and what makes her great.