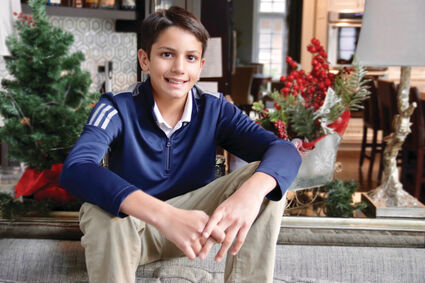 BLAZE BURT ENJOYS PLAYING GOLF, BASKETBALL AND TENNIS • BROTHER TO NADIA, ALEX & IVAN • WOULD liked to have met ALBERT EINSTEIN • HAS STUDIED THE PIANO FOR SEVERAL YEARS • PARENTS ARE TRIPTI AND DAVID

Pop quiz: Where was the Declaration of Independence adopted? What amendment to the U.S. Constitution instituted the national income tax? What number president was Calvin Coolidge?

If you need to phone a friend, Hinsdale's Blaze Burt would be a wise choice. Blaze, 12, honed his civics knowledge this fall preparing for The Coolidge Citizenship Challenge, designed to encourage young people's scholarship in U.S. history, our democratic system, domestic geography and more.

The Hinsdale Middle School seventh-grader rose to the challenge, placing second among his sixth- to eighth-grade peers from around the country by correctly answering questions like those presented.

His exploration of America's underpinnings began after his dad heard about the inaugural national contest, sponsored by The Calvin Coolidge Presidential Foundation. Blaze entered the virtual preliminary round in September.

"They give us 108 questions in a packet, and we had to answer some of those," he said. "There was an extra credit opportunity where you had to recite (from memory) an excerpt from one of Calvin Coolidge's speeches."

He advanced him to the finals on Veterans Day in Washington, D.C., one of six to earn the trip. The content would be the same, but the environment was a bit more imposing, with Blaze dressed in suit and tie fielding rapid-fire questions from three sitting federal judges.

"I was excited. Then they told us about the judges and how formal it had to be, and it was pretty scary," he related.

The experience even included a private tour of the Supreme Court for contestants. At the awards ceremony, Blaze was announced in third place but given the second-place prize of $300.

"Like 30 minutes later they realized they messed it up and had to switch the medals," he said.

President from 1923-29, Coolidge's ascension to the highest office actually happened while he was serving as vice president to President Warren Harding and on a summer visit to his parents in Vermont. Coolidge learned that Harding had died, and his father, John, a notary public, officiated the transfer of power in the wee hours of Aug. 3.

For his memorized recitation, Blaze chose a letter written by Coolidge, an equal opportunity champion, in response to a New York resident's outrage at the possibility of a Black man being nominated as candidate for Congress.

"Our Constitution guarantees equal rights to all our citizens, without discrimination on account of race or color," Coolidge asserted. "I have taken my oath to support that Constitution. I propose to regard it, and administer it, as the source of the rights of all the people, whatever their belief or race."

Blaze relished getting into character.

"I liked acting like I was Calvin Coolidge," he said.

Incidentally, the quiz answers (in order) are Philadelphia at the Second Continental Congress, the 16th Amendment and the 30th president.

Does Blaze want to occupy the Oval Office one day?