Winter sports getting warmed up 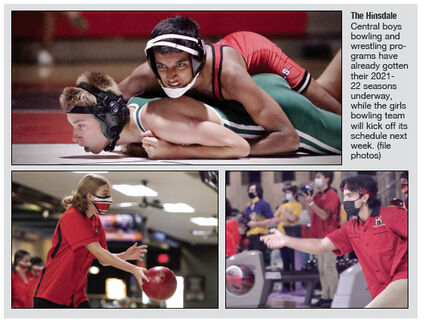 The Hinsdale Central boys bowling and wrestling programs have already gotten their 2021-22 seasons underway, while the girls bowling team will kick off its schedule next week. (file photos)

Tis' the season for ... winter sports! Our series of previews of Red Devils' winter athletic programs kicks of with a look at boys and girls bowling and wrestling.

The teams all face stiff competition from within the conference but are looking for consistent effort and positive development over the course of the schedule. This winter sports preview series will continue in the Dec. 2 and 9 issues.

No. of varsity team members: 12

Team strengths: We have really nice kids, very responsible, respectful, polite kids. They seem wiling to learn and listen. We've got some kids that have been through the competitive experience before.

Areas for growth: They're still trying to find their legs. My roster is the fewest number of kids I've had since the first year of the program. We would love to have some underclassmen in the program - we have no freshmen, no sophomores. We could really use to some younger kids.

Season outlook: Every year I say I hope we improve. We were grateful to be able to compete at all last spring. To get out of our sectional, we're going to have to improve as a team. I think the biggest issue for us is whether we bowl six (players) or five. If a player shows that he deserves to be one of the top guys, he'll get that chance. We try to be very fair about it.

No. of varsity team members: 15

Team strengths: We've got some good athletes. They've been coached before and understand that being successful is a process.

Areas for growth: We're going to be playing with a lot of new girls, We only have one senior on our roster, Where we need growth and development is in being consistent. It's about getting that first ball in the pocket and making makable spares. The good teams and the good players, that's what they do.

Season outlook: We have a very competitive conference, We'll probably finish in the middle of the pack. You can see the development of the kids over the years among those girls that we're able to keep in the program and improve their skills. I'd like to say that we really took a step forward this season in being consistent bowlers. You have to learn how to adjust and be consistent in your approach.

No. of varsity team members: 60

Team strengths: We've got a lot about freshmen out for the team for first time in a while. Hopefully they stick it our all four years. They're training hard and working hard, and we're pushing them.

Areas for growth: We've got several of our top wrestlers out with injuries: JT Pyle, Thomas Skokna and Zach Kruse. Junior Cody Tavoso is out with a hip injury, too, so those are four of our hammers. It's a bummer but it's the nature of the beast. That gives the next guy up an opportunity to compete and maybe make some noise.

Who to watch: I think Cody Tavoso can go downstate and be the state champion. He was sixth as a freshman. Senior Marko Ivanisevic is our team captain, junior Aaron Peres, at 145, junior Hunter Hamdan at 152, and juniors Taylor and Tyler Riggi at 160 and 170 (respectively) should also be fun to watch.

Season outlook: The season's going to be up and down, but I think if we can get through the season without any more injuries, we can have a run for a couple of state places. We hope some of the injured guys heal up over the next several weeks and they can come back by the end of December or early January, I tell the guys to really focus on the process and making progress every day and having a good practice every day - winning the day. You want to be making progress throughout the season so you're wrestling your best in January and February.